Bunker shots can often be very difficult, but even this unfortunate girl was not aware of how hard they can be. 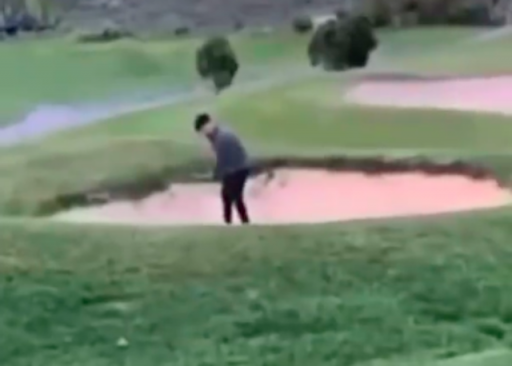 Hitting your ball in a bunker is one of the most dreaded things to happen on a golf course and many golfers struggle to work their way out of the sand in one shot.

Many golfers take too much sand with them and the ball travels nowhere and sometimes they do not make contact with the sand and thin the ball cleanly off the surface and through the green.

Slicing underneath your ball in the sand and watching it spin next to the hole is incredibly satisfying, but what isn't satisfying is being on the end of an errant bunker shot that is flying towards your head.

This was the case for one unfortunate girlfriend, who was on the golf course watching her boyfriend take on a devilish bunker shot.

Now, it takes an extremely loyal and patient person to be able to walk around the golf course and take a genuine interest in their partner's round, so her efforts are commendable.

However, she has not exactly been rewarded as the man's ball flew out of the bunker and straight at his girlfriend. The ball hit her in the head and left a nasty bruise that was bleeding.

"Reckon that stopped his birdie?" another fan said.

" 'How come the golf balls stuck on my forehead?' " one fan commented.

"We should defo take the ladies to golf lads," another fan commented.

NEXT PAGE: WHAT DRIVERS DO THE BIGGEST HITTERS ON THE PGA TOUR HAVE IN THEIR BAGS?