Phil Mickelson partnered with Charles Barkley for The Match III and golf fans absolutely loved the entertainment provided by the pair. 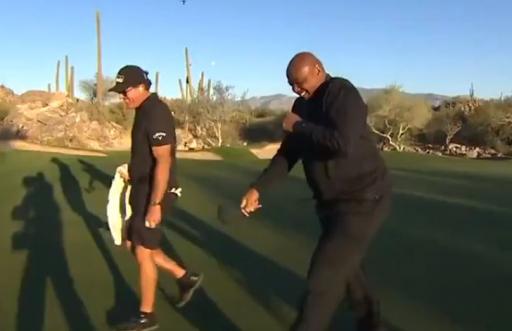 Phil Mickelson and Charles Barkley teamed up to beat Stephen Curry and Peyton Manning 4 and 3 to win Capital One's The Match: Champions for Change, with the four sporting superstars raising $5.455 million for the advancement of HBCUs.

It was the third edition of The Match, with Barkley stepping in to replace Tom Brady, while Curry, who happens to be a scratch golfer as well as one of the best basketball players in the world, replaced Tiger Woods for this year's charity event.

Given Barkley's slightly unorthodox swing and lack of talent in the golf department (sorry Chuck), Curry and Manning were the favourites to win the match at Stone Canyon in Arizona, but it was the underdogs who prevailed, while they also produced some highly entertaining moments for golf fans.

In the second edition of The Match, Barkley was a part of the commentary team and golf fans were calling for the basketball icon to make more appearances with broadcasters, but instead he swapped his seat for a spot on the course.

Barkley was regularly seeking the help and advice of  his playing partner Mickelson, which isn't a surprise given Lefty has accumulated 53 wins during his professional career, including five major championships.

Following Barkley and Mickelson's victory, the PGA Tour put together a compilation video, highlighting some of the best moments shared between the two throughout the event.

The duo we never knew we needed. pic.twitter.com/ZdOABHT570

The video went down brilliantly with golf fans, who praised the pair for providing some much needed entertainment in what is currently a difficult time for many around the world.

"It was entertaining the whole way through. Had me laughing and cheering for Chuck and Phil all day."

"The past few months have been really tough and watching these guys was so fun and entertaining!"

"Was incredible listening to Phil and his thought process."

"I can listen to everyone of rounds. He’s an absolute classic!"

"I could watch tha every week. Too much fun!"