Everyone wishes that they could be this cool when deciding whether to lay up or hit a driver down the fairway. 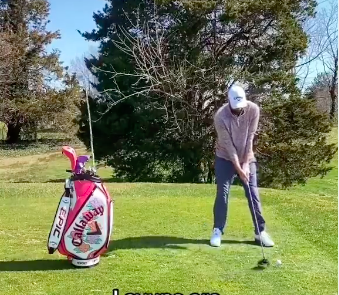 It can be a difficult decision when you are on the tee box, having a good round and you can't choose whether to lay up with an iron or stripe a driver down the hole.

You have to weigh up the risk and reward of the situation and everyone wishes that they could keep their cool no matter which club they choose.

One golfer on social media personified a cool head and calmness by performing an amazing club flip trick. The player had the driver in his left hand and the iron in his right hand, deciding what to do.

The man dropped the iron on to his right foot and he then flicked the club up into the air. The club span a couple of times before landing perfectly into the golf bag.

As soon as the club landed in the bag, the player took no hesitation in making a big swing with his driver and taking the aggressive tactic.

"I can't even normally put a club back in my bag that smooth haha," one fan said.

"One of your best vids," one fan commented.

"That’s the wrong slot for long irons," another fan said.

"Can I have your bag? It looks more for a girl," another fan commented.

"Where can I get one of those bags?!" one fan said.