This golfer will be looking to forget this nightmare hole, but with the video going viral it may take a while... 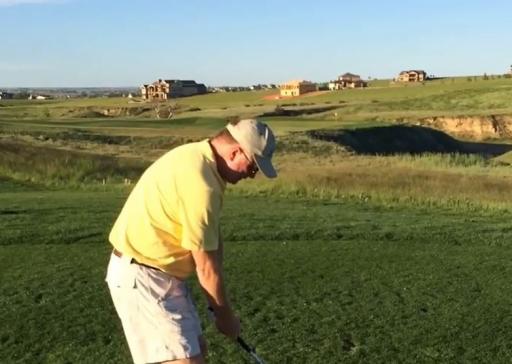 Stroke play in golf can be extremely cruel at times and even professional golfers on the PGA Tour walk away from holes with a double-digit score from time-to-time and for this amateur, a certain par-3 was testing his patience...

In a video posted on Instagram by Golfersdoingthings, this unlucky golfer can be seen making a note of how many tee shots he's already taken at this testing par-3.

RELATED: Golfer rants about his shocking round to girlfriend in HILARIOUS video

The golfer has clearly been struggling on the mid-range par-3 and explains that a couple of shots were left short and lost in no man's land, while one was a clean strike but ended up going long.

He takes another practice swing (and a beautiful one might I add) before giving himself a few words of advice: "Nice swing, now do it tht way! You don't have to hit it that f***ing hard."

Would the 11th shot finally be the one that lands safely on the green? Nope.

WATCH THE SHOT IN THE VIDEO BELOW:

Golf fans flooded the comments section in response to the video, with those who watched able to relate to the poor bloke's frustration.

"'You don’t have to hit it that fuckin hard' hit a little too close to home," said one golfer.

"Just me or was the practice swing perfect?"

"Buddy go drop on the fringe."

NEXT PAGE: Is this the WORST tee shot ever caught on camera? We think it might be...