Golfer makes TWO ACES in one round during charity event

22-handicap golfer makes his first career hole-in-one at Overstone Park GC, then follows it up with another nine holes later... 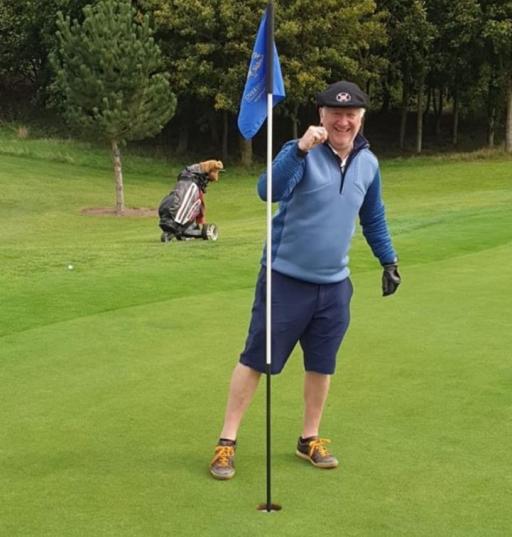 Just one week after a lady golfer made back-to-back holes-in-one during a round in the United States, news has reached us today that a male golfer has achieved the same feat of two aces in a round of golf in the United Kingdom.

Take a bow Russ Sizer, who not only made his first career hole-in-one at Overstone Park Golf Club in Northamptonshire during a charity event for Dreamflight (aimed at raising funds for disadvantaged children) last Friday, but then incredibly made another one nine holes later.

The odds of the same player making two aces in one round of golf are in fact not dissimilar to one of my audacious 15-fold Saturday football accumulators at 67 million to 1.

Russ, 61, was playing with three of his oldest golfing pals and teed off the AM/AM tournament on the back nine.

Russ, a 22-handicapper, pulled out his trusty 6-Rescue and sent a beautiful shot straight down the flag. The ball cleared the front bunker and then trundled up the green as it rolled gently into the cup for his first career ace. Cue wild celebrations on the tee.

Still on a high after what happened, Russ kept his composure for the rest of the round and then did the unthinkable by making a second hole-in-one in the space of nine holes at the 120-yard par-3 4th hole.

Russ deliberated on his club selection given the testing prevailing right-to-left breeze, but then opted for a 7-iron.

He sent his ball slightly right of the flag and then allowed the wind to work its magic as the ball caught the slope and rolled down into the cup for a second ace of the day.

"I just can't believe what has happened - I am buzzing and can't stop smiling," said Russ.

"I have been playing golf for more than 30 years but had never previously had a hole-in-one, and then two come along at once! I can't stop stop talking about it to people."

Incredibly, the same thing happened to lady golfer Lindsey Harrison last week out in the United States when she made consecutive aces on the 15th and 17th holes.

A massive congratulations Russ from all of us here at GolfMagic - an unbelievable achievement!