Even Eddie Pepperell had something to say after this video went viral... 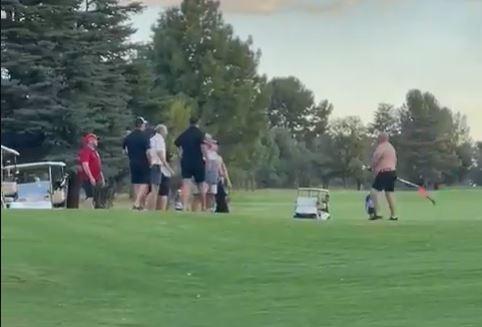 A video has gone viral on social media of a fight breaking out on a golf course between two men, with one of them grabbing a flag out the cup to use as a weapon.

The video has had over 100,000 views already on Twitter and even European Tour star Eddie Pepperell got involved in the comments, saying: "Happens to the best of us."

Unfortunately, we have no information as to what started the fight, but going by the video, there is a fairly large group of men standing together, who make no attempt of breaking the fight up.

WATCH THE CRAZY FIGHT ON THE GOLF COURSE BELOW:

Of course a video like this draws a lot of attention, as the golf course isn't your typical spot to throw fists, although I've seen a few similar videos in the past.

Anyway, save the scraps for the octagon lads and let the rest of us hack it round the golf course in peace.

Take a look at some of the responses on Twitter below.

"I’m not sure he should have removed the flag, isn’t he at risk of contracting COVID."

"That’s why you should always take a spare shirt, just in case you get a hole in one."

"Some pretty good flag head speed on that swing."

"Three things to point out. Incorrect golf attire. Touching the flagstick in contravention of Covid rules. Holding up play."

"Did the ball fall off the tee and he said "1"? Someone finally has had enough!"

"He’s definitely swinging over the top with the flagstick, very choppy 2/10."

NEXT PAGE: How Tiger Woods played a part in Will Zalatoris' impressive Masters debut