Guido Migliozzi clinches his second European Tour title in his rookie season, and we couldn't be more proud! 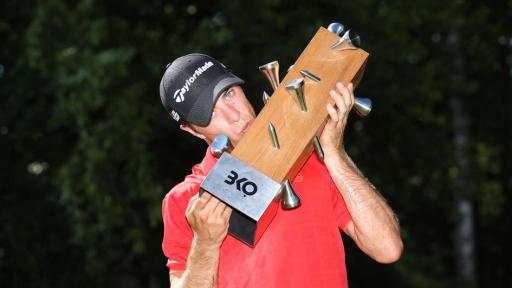 Guido Migliozzi landed the knockout punches at the Belgian Knockout as he clinched the second European Tour title of his outstanding rookie season.

Migliozzi, who writes a regular blog for us here at GolfMagic.com, has been riding the crest of wave since earning his European Tour card for 2019 and his latest win follows his maiden title at the Magical Kenya Open in March.

The 22-year-old Italian joins Kurt Kitayama as the only two players to have won twice on the European Tour this season.

Migliozzi moves up to 21st in the European Tour's Race to Dubai standings and his win vaults him up into the world's top 100 for the first time in his career (95th).

The unique format to the Belgian Knockout involved 36 holes of strokeplay on Thursday and Friday, with knockout nine-hole strokeplay matches throughout the weekend.

Migliozzi finished in a tie for fifth in Section A after 36 holes of strokeplay to play his way into the top 64.

Back for more on Sunday morning in the quarter finals and Migliozzi overcame a resurgent Bernd Wiesberger who had won on the European Tour just seven days previous, and then he beat his friend and fellow Modest Golf star Ewen Ferguson in the semi-final.

Migliozzi then produced a driving masterclass in the final against Darius van Driel to card a 3-under total for nine holes, enough for a comfortable four-stroke victory.

Migliozzi is managed by Modest Golf which is owned by Niall Horan, who spoke to GolfMagic two weeks ago about all things golf in particular his admiration of Guido.

Niall was also quick to praise his man following his latest victory...

GUIDO MIGLIOZZI: IN THE BAG

Stay tuned for Guido's new GolfMagic blog in the coming days, where the Italian will discuss more about his latest tournament victory and he will also be giving away a replica of one of his TaylorMade clubs!