GolfMagic readers debate: Should tour players be made to find their own ball?

We asked our readers if they think tour players should be made to look for their own ball without the help of marshals... 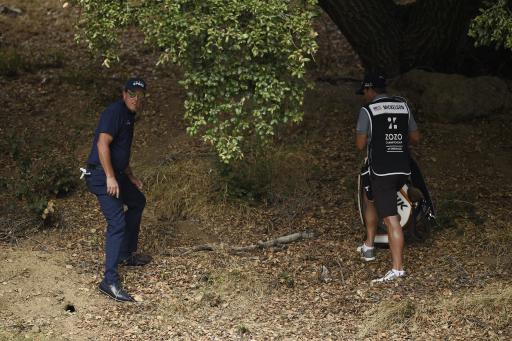 Professional golfers on the PGA Tour have a lot of perks, one of which is being able to send their golf ball far and wide off the tee, only for a marshal or volunteer to quickly spot where it landed and go trekking through the trees to find it for them, but is that the way it should be?

We saw a lot of people discussing how much help professional golfers receive when it comes to finding their golf ball, which was sparked at the CJ Cup in recent weeks, where at one point there were nine people looking for Brooks Koepka's ball.

Now we're fully aware that making players search for their own ball would most definitely slow the game down, something golf's governing bodies have been trying to combat for years, but what it surely would do is help against the great distance debate.

Players don't mind taking the risk of bombing one as far as they can off the tee, as they know that no matter where it lands, their ball is going to be found by someone on the course.

If players were restricted to finding their golf ball with only their caddies and playing partners - similar to the amateur game - then maybe it would place more of a premium on accuracy.

It's certainly a question worth thinking about, which is why we posed the question to our readers and hundreds of people got involved which was fantastic to see, so thank you if you took the time to comment!

The responses were extremely balanced, with some golf fans adamant that this would be a positive change for the game, while others were concerned about pace of play and other factors, so take a look at some of the responses below or head over to out Facebook page to have your say.

"Let them find their own and make the game more relatable. That is the answer for the “big hitter problem.” Sure you hit the ball 400 yards over trees over a creek landing in a speed slot.... now where is it? I’ve lost 290 yard drives that went straight and landed in the middle of the fairway," said Carl Bartholomew.

"If it’s going to keep the game moving then I’m all for it. Watching the golf on TV is so slow. They can take sometimes 5 mins per shot. It’s a joke," said Neil Finch.

"They should do what we all do, search with our playing partners only," said Steve Swarbrick.

"Without question I’d say we should always help someone find their ball, pro or amateur! Golf is hard enough! We could all do with a bit of help when possible," said Jase Goodman.

"100%. I think in a game of accuracy there should be no assistance. Only caddie and golfer should be allowed to look for the ball, they are the competing team This gives an unfair advantage. Where is the skill in bombing it and then relying on a spectator or other to help find it.
There is no sport in that. I'm not saying that you can't go out and hit it 400 yards. But be aware of accuracy," said Cassius Ricardo.

"If it’s beyond the ropes next to people they should help. If you are calling people from all over to help then that’s not on. Bad enough they (normally) have the bulk of the worst rough trampled down by fans (patrons) that we amateur golfers will have to face," said Stuart McKinnell.

"Yes that way they have to take a drop like the rest of us have to. Scores wouldn't be as high if they didn't have caddies and everyone looking for lost balls. Won't see them high under par scores. 3 mins to look for a ball is all we get so should they," said Greg Ellis.

"No, the more eyes the better," said Patrick Perea.