Bryson DeChambeau hits a drive with 403-yards of carry without using his new 48-inch driver and it's caused mixed opinions on social media. 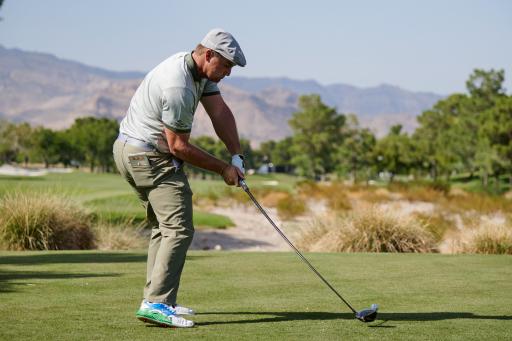 Bryson DeChambeau has caused a stir on social media after revealing shot data that showed a drive carrying 403-yards, which he reached without the use of his new 48-inch driver that we are likely to see at the Masters.

Just when you thought we'd run out of things to say about DeChambeau's mission for speed and distance, the reigning US Open champion gets everyone talking again.

DeChambeau made it clear after his win at Winged Foot that he was determined to get even bigger, even faster and even longer in his quest to dominate every golf course he stumbles upon.

There's no question that DeChambeau's new size is helping him on the golf course, despite thousands of people saying it wouldn't work and the World No.6 wants to get even bigger before he tees it up at Augusta in November.

"They always say, when you work out, you gain your 30 pounds or whatever it is, and then after that, each year, you half it. So you can go 15. If you keep working out every day, you keep halving it. And then eventually there comes a point where you can’t gain much more. But I still feel like I can get up there if you work hard enough.”

DeChambeau also revealed that he has been getting excellent results with a 48-inch driver - the longest length allowed by the USGA - and we are likely to see him use it at the Masters.

As DeChambeau prepares for the final major of the year, he decided to share his longest drive to date on his Instagram story, where he carried the ball over 400-yards for the first time ever and without the use of his extra-long driver.

Of course this caused a huge reaction once it started doing the rounds on social media, with most comments taking the negative route and hitting out at DeChambeau, whilst some applauded him for his transformation and success.

The PGA needs to step in, this is not how golf was created.

Honestly mission accomplished @b_dechambeau what’s going to happen is the @USGA @EuropeanTour will ban some of these stretched things your doing. Millions of people who love the game,don’t want this in the game. The max distance a ball should be aloud 300 yards it’s good enough

The vitriol from some of these twitter heads is moronic. 10 fairways at 370 is better than 10 fairways at 310. It’s like punishing an “A” student for studying. He’s trying to be his best. Get bent.

The Mad Scientist is at it again pic.twitter.com/Il0LG1U2Qq

Not enjoyable to watch. I’m guessing he’ll have Couples back in the near future. Golf courses aren’t made for this and if you make them longer you penalize everyone else on tour.

Hard to argue with success. God bless him. I have to wonder if swinging the club that hard, that fast repeatedly, lifting weights, could lead to wear and tear eventually. Hope he stays healthy, but hard to imagine what he’s doing is sustainable long term.

Not the future of golf I want to see!!

This distance will come in handy at Augusta National, Bryson#TheMasters
We saw you drive straight & far, when you won the U.S. Open.
You kept your ball on the green, pretty consistently.
Bryson, you will definitely do well at Augusta.
Trust the driver.
You got that!@GolfCentral

NEXT PAGE: How much every player won at the ZOZO Championship...