Ernie Els has confirmed that Donald Trump did get an ace despite the doubts of many on social media. 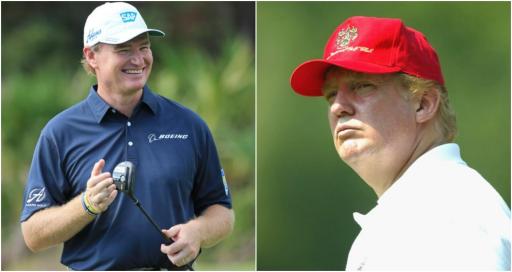 In true Donald Trump style, the former US president has released an interesting statement after there were some doubters about his hole-in-one claim.

The scene of Trump's triumph was his own golf course - Trump International Golf Club in West Palm Beach, Florida.

It was on the seventh hole and Trump reportedly hit a 5-iron into a par-3 that was measuring 181 yards into what he describes as a slight wind.

The very next sentence he describes watching the ball "sail magnificently into a rather strong wind".

From there, he claims that the ball bounced twice and then went into the cup. The first of five hole-in-ones that day, one social media user chimed in.

Trump was playing in the presence of Ernie Els and former winner of the U.S. Senior Open Ken Duke and former tour player Mike Goodes.

Here's Donald Trump's statement on the hole-in-one he made over the weekend playing with Ernie Els, Ken Duke, Gene Sauers and Mike Goodes. Trump says it was a 5-iron from 181 which "sailed magnificently into a rather strong wind, with approximately 5 feet of cut" pic.twitter.com/vnUYBV1PFS

Great shot on Saturday 45! Fun to watch the ball roll in for a hole-in-one.

TRUMP JUST MADE A HOLE-IN-ONE! pic.twitter.com/89lrgsGkjT

He says of the hole-in-one: "These great tour players noticed it before I did because their eyes are slightly better, but on that one hole only, their swings weren't."

Trump says the match was himself and Els (with no strokes) against the other guys but he won't tell you who won because he's a "modest individual".

All we had of this news was a picture taken by Tim Swain, a Republican running for senate.

But today The Big Easy confirmed the news, writing: "Great shot on Saturday 45! Fun to watch the ball role in for a hole-in-one."

Well there you go.