Bryson DeChambeau to Dustin Johnson: "Are you trying to take out my other hip?"

Dustin Johnson was filmed hitting a chip shot towards Bryson DeChambeau and his caddie before round one of the WGC Match Play. 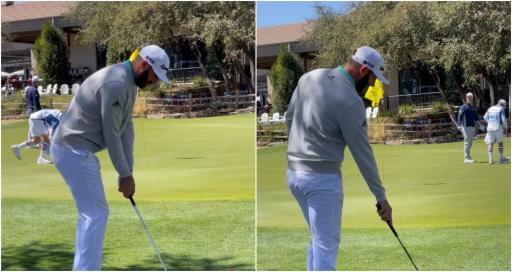 PGA Tour professionals have an abundance of skill around the greens. As a former Masters champion, we know Dustin Johnson has  that expertise in spades. And he used that skill to try and antagonise Bryson DeChambeau.

Former World No.1 Johnson was filmed on the practice green at Austin Country Club by a fan ahead of the first day of play at the WGC Match Play.

The fan caught Johnson taking a cheeky chip towards DeChambeau and his caddie Brian Zeigler. We know the footage was from day one because we can see the colourful socks worn by Zeigler that got quite a lot of attention.

Johnson takes the shot and we can see DeChambeau, 28, stop in his tracks. DeChambeau then lifts his iron up in the air before turning around and seeing the culprit, most probably grinning at him.

While we can't make it out exactly what was said it appeared he said something along the lines of "Are you trying to take out my other hip (?)..."

DeChambeau has been rocked by a number of injuries that has limited him to just two appearances on the PGA Tour in the 2021-2022 season. Those being the Sentry Tournament of Champions and the Farmers Insurance Open.

He looked in visible anguish as he missed the cut at the Farmers. He later told how he had been struggling with issues with his hip and also wrist, which he also confirmed was fractured.

The WGC Match Play was DeChambeau's first start on the PGA Tour in a few months and it was wildly entertaining as ever. His first drive back found the medical tent as he halved his opening match with England's Richard Bland.

DeChambeau unfortunately did not make it out of the group stages. Johnson, on the other hand, went on to reach the semi finals where he was beaten by the eventual champion and new World No. 1 Scottie Scheffler. Johnson also lost to Canada's Corey Conners 3&1 in the third place playoff.