Norman considers McIlroy's decision came from those around him... 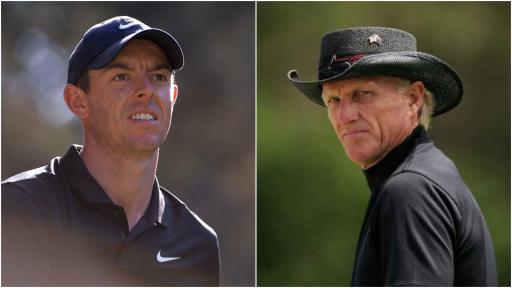 Greg Norman has told GOLF.com he is unhappy about Rory McIlroy's decision to oppose joining a new Premier Golf League and feels the Northern Irishman's decision was from "people around him."

McIlroy confirmed he was bowing out of any potential PGL over the coming years ahead of last week's WGC-Mexico Championship.

"The more I've thought about it, the more I don't like it," McIlroy told the press. "I would like to be on the right of history."

In an interview with GOLF.com, however, Norman, who once put forward plans for his own World Golf Tour back in the day, was a little miffed by what the World No.1 had to say about things.

"I like Rory, no question about it," Norman told GOLF.com. "But I think what he said was probably coming less from him than it was coming from people around him."

According to an email exchange with Golf Channel off the back of Norman's claims, McIlroy's team have confirmed the comments were straight from the four-time major champion's mouth and nobody else's.

RELATED: GREG NORMAN BELIEVES PGL IS THE NEXT IMPORTANT STEP IN THE GAME

Norman told the media last month that despite his failed attempt at a World Golf Tour when he was World No.1 at the time, he genuinely believes it has legs this time around.

"It’s just a matter of getting all the right components together, whether players stay together," Norman said last month.

"With my original concept, some players loved it and others didn’t like it. I had corporate, I had television, but you need 100 per cent of the pie to be together before we can bake it. From what I’m seeing here, this one has every chance of getting off the ground.

"The PGA did it, Formula One did it, tennis has done it, soccer has done it and so has cricket. I saw it 25 years ago, but maybe the time is right now," added Norman.

"It was pretty much the PGA Tour that stopped it. You’ve got to remember back in my day the players were looked on a little bit different. Seve [Ballesteros], Jose [Maria Olazabal] and I were trying to tell everybody we were independent contractors who could go and play anywhere in the world we want."