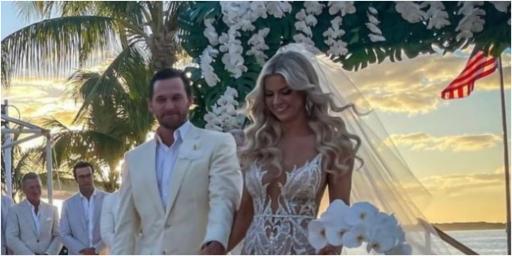 The son of golf legend Greg Norman has tied the knot with his partner in a stunning beach ceremony in Florida.

Gregory Jr got hitched to real estate agent Michelle Thompson under an archway of fresh orchids in Islamorada, in the Florida Keys.

He was surrounded by friends and family including his 66-year-old father, known as the Great White Shark.

Gregory Jr is involved is a businessman involved with two companies. He is an entrepreneur and the CEO/co-founder of Jupiter Group and Shake Wake Park.

Norman posted: "Now this beautiful couple embarks on their new journey in life together. As a father I am so proud and happy for both. Congratulations and welcome to the Norman clan Michelle. I Love you both."

Australian golf legend Norman was this year named as the CEO of LIV Golf Investments, which is a new company that is bankrolled by the Saudi government. They have planned a new golf series in 2022 under the umbrella of the Asian Tour.

Campaigners say this is an attempt by the government to sportswash its human rights issues. While rival golf tours (the PGA Tour and the DP World Tour) are worried about the competition and financial impact this will have.

Norman insists that he just wants to "grow the game" and encourages players to work as independent contractors, picking and choosing where and when they play their golf. He previously tried to set up a world golf tour in the 90s.

This year, the European Tour rebranded to the DP World Tour in a multimillion dollar deal which will boost prize funds in 2022. This was seen as a direct attempt to try and stop tour players from plying their trade elsewhere.