Harold Varner III needed a birdie to force a playoff but drained a massive eagle putt to snatch the win at the Saudi International by one stroke. 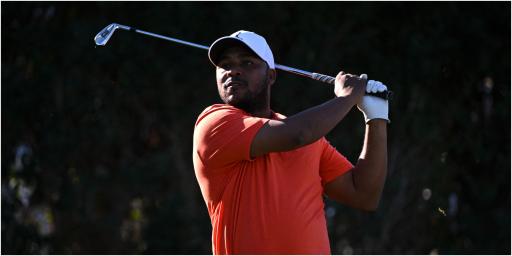 Harold Varner III drained a huge eagle putt at the 72nd hole to snatch a landmark victory at the Saudi International.

It looked like the title and the $900,000 winner's cheque was destined to be heading towards Bubba Watson.

Watson, 43, carded a 6-under final round to snatch the clubhouse lead at Royal Greens Golf & Country Club to pile the pressure on Varner III.

The left-hander also made an eagle and a birdie in his final two holes after seemingly coming out of nowhere on the final day.

Varner III looked as if he was going to have to lament a frustrating double bogey at the 14th which looked like it put an end to his chances.

But a birdie at 17 meant that he needed a birdie to force a playoff with the two-time Masters champion. Instead, he drained his eagle putt.

Harold Varner III drains a massive putt from off the front edge for eagle and wins the Saudi International by one shot over Bubba Watson! pic.twitter.com/yjoybZE3nA

Varner III let out a massive roar in celebration and embraced his caddie. He has never won on the PGA Tour.

The 31-year-old has won on the European Tour before. That victory came at the Australian PGA Championship in 2016.

Elsewhere, England's Steve Lewton was a surprise package and finished inside the top five after finishing at 9-under par for the week.

Cameron Smith joined him on the same score. Matthew Wolff, Tommy Fleetwood and Dustin Johnson finished inside the top 10.

More: How one pro was let down watching Tiger Woods