Mark Anguiano almost threw away his chances of qualifying for the Korn Ferry Tour when his caddie made a crucial observation... 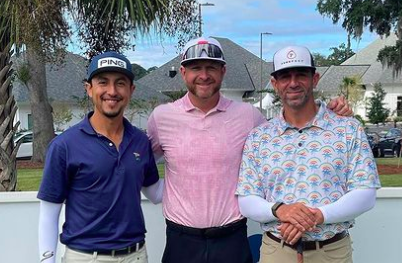 The final qualifying stages for the PGA Tour and the Korn Ferry Tour are regularly filled with drama and excitement, and a few skipped heartbeats for the players involved.

Mark Anguiano's heart must have been doing summersaults when he sent his ball sailing towards some out-of-bounds posts during the last round of the Korn Ferry Tour final qualifying.

His ball finished on the cusp of the out-of-bounds line and they had to call in a rules official to find out if he had to go back to the tee to play a second ball.

The official got his string out and judged his ball to be two inches out of bounds, compared to where the white boundary posts were.

Yesterday he hits it right. They get to the ball and are not sure if it's OB or not. They call rules official and he runs a string. The ball is out by 2 inches. Mark picks up the ball and heads

With his heart in his mouth, Anguiano picked up his ball and headed back to the tee box at The Landings. However, his caddie made an important observation.

He noticed that the pole that the official measured the string from was different to the other out-of-bounds posts. All of the OB posts had a painted circle at the base.

The rules official confirmed that this was in fact not an OB stake and so the ball was able to replace his ball. He went on to make a par.

The 29-year-old went on to finish in a tie for 29th which was enough for him to earn eight starts on the Korn Ferry Tour by one shot.

RELATED: BRYSON DECHAMBEAU REVEALS MOST IMPORTANT CHANGE IN HIS GAME THAT ISN'T DISTANCE

Anguiano has made fleeting appearances on a number of tours, including the PGA Tour. He competed at the Waste Management Phoenix Open in February but unfortunately missed the cut.

The American has not made an appearance on the Korn Ferry Tour since 2019 and he made 10 appearances on the Forme Tour in the same year.

Anguiano will forever be grateful for his caddie's crucial work and you never know what Korn Ferry Tour qualification can lead to.

NEXT PAGE: PAUL CASEY ON DP WORLD TOUR: "IT SHOULD HAVE BEEN A WORLD TOUR 20 YEARS AGO"