Fan-favourite John Daly was filmed making an ace with no shoes or socks on during a charity golf day. 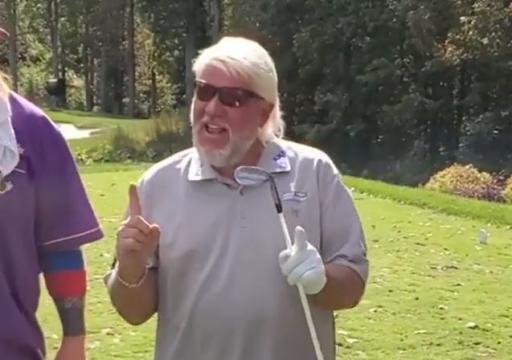 John Daly might be battling with bladder cancer but that hasn't stopped the crowd favourite from getting his 11th hole-in-one and this time he did it without any shoes or socks on...

The moment was posted on Instagram by Josh Price (@joshpricegolf) who was filming Daly as he stepped up to take his shot on a par-3 during a charity event for fallen Navy Seals.

Watch Daly make his ace in the video below:

"I witnessed John Daly make a hole-in-one today at my golf course in a charity event for fallen Navy Seals. Glad I decided to record," said Josh in the post.

It takes a bit of time for Daly to realise he's made the ace and he looks a little bewildered when everyone around him is screaming, but once he knew his ball was in the hole he joined in the celebrations, before saying: "That makes 11 of those mother..." (Daly decided not to finish that sentence).

"Oh my goodness. John Daly just made a hole-in-one and I got it on video," said Josh whilst filming.

It's great to see Daly enjoying himself and still playing golf, as last month the big-hitting American revealed that he's "not scared to die" and opened up about his battle with bladder cancer.

Daly promised to change his lifestyle in order to try and keep his body in a healthier state.

"I'm cutting way, way back on the Diet Coke and counting minutes before I can have a cigarette," said Daly in September. "I'm trying to quit smoking. The doctors aren't saying it's too late. Unfortunately, it's a cancer that keeps coming back."