Jon Rahm says cameras have followed him to "get a reaction"

Jon Rahm revealed that cameras on the PGA Tour have followed him to get a frustrated reaction out of him. 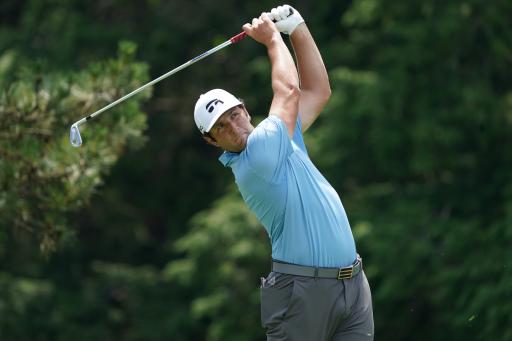 Jon Rahm revealed that cameramen on the PGA Tour have followed him to try and film some kind of frustrated reaction, but he does understand why golf's top stars are focused on so much.

Somehow one of the hot topics of the week is cameramen and whether or not they film certain players for too long. Never thought I'd be typing that in an article.

At last week's Rocket Mortgage Classic, Bryson DeChambeau confronted a cameraman as he felt that he was waiting for something bad to happen.

RELATED: Bryson DeChambeau: "He was waiting for me to do something bad"

DeChambeau said that there was no reason for the camera to be on him for that long, especially when it was a hole that hadn't gone according to plan and that players need "more protection" when it comes to cameramen trying to "damage their brand."

Of course this topic sparked a debate and many golf fans grilled DeChambeau for contronting the cameraman and stated that it's his job to focus on players and their reactions, especially those at the top of the game.

Ahead of this week's Workday Charity Open, World No.2 Jon Rahm was asked whether he thought the work of camermen was an issue on the PGA Tour.

Rahm, known for his fiery temper and passion, said: "Well, I mean, you're talking to a guy who's easy to get a reaction from. Yeah, I mean, they have followed me to get that reaction.

"I've spoken to some directors before, and what the answer is is that they want to show the public the frustration we go through, which is true. I don't think they realize how stressful this can be sometimes."

The Spaniard's main issue with cameras on the PGA Tour wasn't filming his reactions, but seeing them move during a shot routine, causing players to step away and restart.

"The only time where I have a problem sometimes on the PGA Tour is when there is camera movement -- so let's say I hit a shot and the camera is on me for a little longer, and let's say next is some other player to go, sometimes they stay on me a little too long and then they rush to the next player and you can see them from your peripheral and you have to stop and restart your routine, right. It's happened multiple times.

"Or you're hitting a shot and they get your line on the putting or chipping, and that's what I have an issue, right. When you're disrupting play, that just shouldn't happen.

Rahm went on to add that if you're going to let your frustration get the better of you from time-to-time, then you need to understand that you will get criticism and trying to shy away from that isn't the answer.

"The only problem, like I've said, that I've had is when the disrupt play a little bit, and that shouldn't happen. In professional golf we shouldn't be waiting for cameras to be in place.

"But other times if they're not going to have to go to the next player and they want to try to catch me saying something or my face after a three-putt or a bogey or a bad shot, well, I mean, if you've watched golf the last year you know what my reaction is going to be, but yeah, I understand why they do it."