The young Japanese superstar will play three majors in 2022 including at Augusta National. 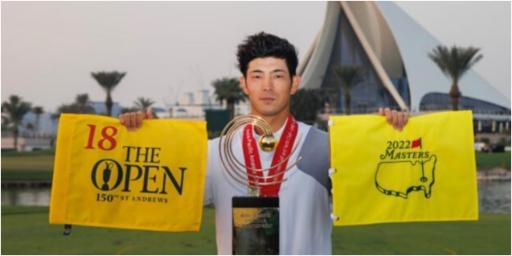 If you have to remember one name in the golf world at present then it may as well be Keita Nakajima.

He's the number one ranked amateur in the world and now he will have a chance to peg it up at the Masters.

The 21-year-old was the hot favourite to win the Asia-Pacific Amateur last week and for good reason too.

He won it after a playoff and became the third Japanese player to win the title.

He follows in the footsteps of Masters champion Hideki Matsuyama and Takumi Kanaya who have previously won the tournament.

MORE: GOLFER STIFFS IT TO AN INCH ON ISLAND GREEN

If you haven't seen his swing, he absolutely rips it:

If you’re ever going to copy a golf swing, I suggest this one! #1 amateur in the world Keita Nakajima! pic.twitter.com/q6rIcZx7J5

Nakajima is already exempt from the U.S. Open and the Open through his status as the world number one.

Now he'll get to play Augusta National in 2022.

"To follow in the footsteps of Hideki and Takumi feels great," he told the media.

"I am so excited that I will be playing three majors in 2022. I am very thankful for the tournament for giving us such great opportunities."

Nakajima played the 18th hole twice against Hong Kong's Taichi Kho in a playoff at the Dubai Creek Golf and Yacht Club in the United Arab Emirates.

Both had reached 14-under par but it was Kho who blinked first when he found the water when his tee shot found a fairway bunker and was nestled up against the lip.

Nakajima reportedly started playing golf at the age of six after watching Tiger Woods on television.

He's had some impressive wins already and on his PGA Tour debut at the Zozo Championship (Matsuyama won it), he finished 28th.

This kid has game.

NEXT PAGE: WITB OF VIKTOR HOVLAND?