The 28-year-old had a poor front nine but Patty Ice was a source of inspiration to him in Mexico. 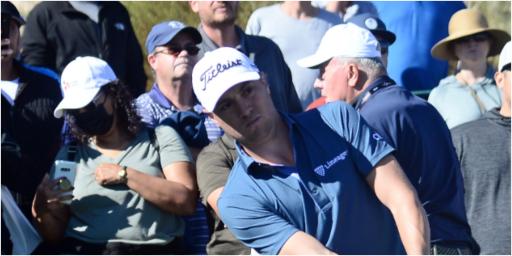 When Justin Thomas made the turn after his first nine holes last week you would not have expected him to be in contention to win at the World Wide Technology Championship.

Loose shots were played, putts weren't dropping and the 28-year-old looked out of sorts and perhaps felt out of his mind.

He may have tempted Bones away from the microphone and back to carrying but perhaps it was another PGA Tour star who may have helped Thomas turn it around.

That man is none other than Patrick Cantlay, or no hat Pat as he was affectionately known during their successful Ryder Cup win at the whoopin' at Whistling Straits.

MORE: THIS SIMPLE TIP WILL IMPROVE YOUR DRIVING

MORE: WHAT WERE THE PAYOUTS AT MAYAKOBA?

Cantlay is no stranger to staying calm on the golf course, his demeanour suggests as much and it seems he has been a source of inspiration for Thomas, who tried valiantly but ultimately could not chase down a flawless Viktor Hovland in Mayakoba, Mexico.

Something happened to Thomas after nine holes at El Camaleón Mayakoba Golf Club where he signed for three bogeys.

Six birdies on the back nine, including five back-to-back got him back under-par.

Thomas made 24 birdies last week after a less than ideal start.

He later posted a message on Instagram saying: "What a game I decided to play..."

"I'm very, very proud of myself to be where I'm at," he told the media.

"It's funny, I played with Cantlay the first two rounds of the BMW this year and he had a very similar start. He was off to a very, very sluggish start."

Like Thomas, Cantlay was level through nine holes then finished on 27-under for the tournament.

He bested Bryson DeChambeau in a playoff epic.

"He was hitting it really bad and scrambling for pars and bogeys, and on an extremely easy golf course like that, I think he was a couple over around the turn, and we all know what happened that week.

"So I kind of reminded myself of that because I watched him just stay patient and plod his way along."

Thomas is searching for his 15th victory on the PGA Tour.

Only a foolish man would bet against him doing so.

MORE: ARE YOU ALLOWED TO USE THIS CLUB?

NEXT PAGE: THIS TIGER WOODS STATISTIC IS REMARKABLE