Jared Wolfe attempted to play a par-3 using a skateboard, a stop sign and a silver spoon. 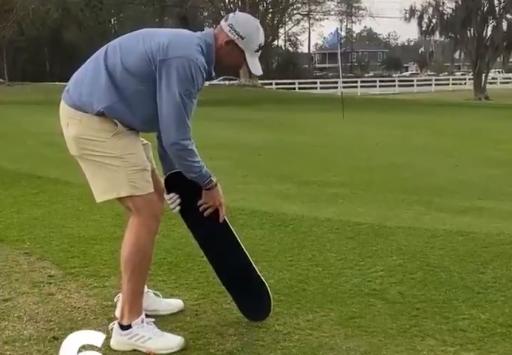 We've all tried a few whacky things on the golf course before and sometimes it's good to try and get creative, but using a skateboard as a golf club is something I'm yet to (and never will) attempt.

It's Friday and you've all probably been working hard to here's a bit of entertainment to ease you into the weekend.

Korn Ferry Tour golfer Jared Wolfe was tasked with playing a par-3 three times. Firstly with a skateboard, then with a stop sign and lastly with a silver spoon.

Now I know these guys are professionals, but I think even the world's best would struggle with this challenge.

WATCH THE STRANGE PAR-3 CHALLENGE IN THE VIDEO BELOW:

Trading the clubs for a stop sign, skateboard and silver spoon.

(Yes, a stop sign.)@JaredWolfePro is primed to chase a Three-Victory Promotion to the @PGATOUR. pic.twitter.com/3jGWSnhtnl

It was an oddly entertaining video and I must say I wasn't expecting to enjoy it as it came up on my Twitter feed, but after seeing that first tee shot with the skateboard I was intrigued to see just how many shots it would take Wolfe to get the ball in the cup.

It took him nine shots with the skateboard, not a bad attempt at all. I was quite surprised to see how low the ball was coming off of the object, as given its design it looks like it would give the ball some air, something that Wolfe was expecting too.

"I keep thinking it's going to go way up in the air, but it's really not, it just goes flat and it rolls," said Wolfe after his fifth shot with the skateboard.

The stop sign looked like it was going to be the most difficult to use as a golf club, due to the wide surface area not allowing any speed with the shot, but it took Wolfe nine shots to complete the hole, the same as the skateboard.

The Silver spoon was the winner, with Wolfe making an 8 for the hole. No surprises there really as although it's not much bigger than the ball itself, it did allow Wolfe to take a proper swing at it.