Matt Kuchar at centre of more CONTROVERSY, this time over a pitch mark 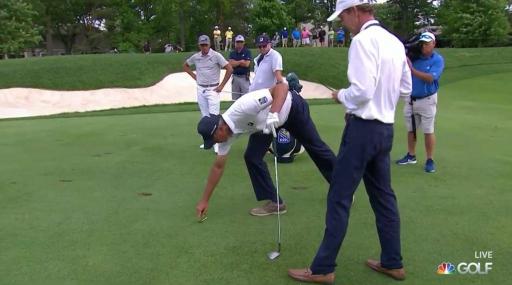 Matt Kuchar was at the centre of yet another moment of controversy on the golf course during round one of the Memorial Tournament - this time over the issue of a pitch mark that required two rules officials and an instant replay to figure it all out.

Kuchar struck his tee shot down the par-4 17th and his ball finished up at the end of a pitch mark that he, and later a rules official, determined was not his own.

The in-form American, however, called in PGA Tour rules official Robby Ware in an attempt to gain relief on the belief that his bouncing ball had indeed created a second pitch mark that overlapped with the original.

Under the rules of golf, players are entitled to free relief from their own pitch mark, but not from that of another player.

Ware asked for assistance from NBC's pictures of the tee shot, but did not believe Kuchar was entitled to any relief.

Kuchar was persistent he was, and called in another rules official Stephen Cox, telling him: "I'm just saying, there's potential that it broke new ground in making its secondary pitch."

Cox also stood firm on the issue and said: "Matt, the ball came to rest right there, and we know that it's not your pitch mark."

Kuchar came back with: "I'm saying, if you look at the film, it looks like it's gone hard enough to break new ground."

Cox replied: "Ultimately it’s already in a hole that’s made by someone else, and I’m not buying that on a secondary bounce we’re going to get you out of a pitch mark that’s been made by somebody else."

"Honestly, trust me, the guys have already seen it on TV…let’s get it back in play. It’s in a pitch mark which has been made by another stroke. That’s the decision."

Kuchar then paused and even had the audacity to say: "Could I ask for a third." We can't be sure he was joking, but we hope he was!

After all of that, Kuchar hit his second shot with a 7-iron and two-putted for a par en route to a lacklustre round of 1-over 73.

Playing partner Rickie Fowler, who shot a respectable 69, saw the funny side of things after the round as he walked into the interview room with a wide grin before saying: "Cheat! He was trying to cheat!"

Kuchar added after the round: "Rickie was all over me like a hawk out there. I thought there was potential that it might have broken new ground. I guess it’s not a new embedded ball if it breaks new ground."

According to Kuchar, it marked the only time in his career where he had asked for a second opinion on a ruling.

"The only reason I did it is just from seeing the video and not being totally clear on the rules, and they’re tricky enough. We’re lucky to have a great staff out here and I certainly trust their opinion. I only asked for a second one because I thought there was potential and thought, you never know, you may get someone else who says there is potential, we could look further into that."

Kuchar has been causing a number of controversial issues this season, first with paying his stand-in caddie a disgraceful amount of money following his victory at the Mayakoba Golf Classic where he bagged more than $1 million at the end of 2018. It is understood, after a public outrcry, that Kuchar would pay the caddie a larger amount of money.

He was then also caught in a gimme row during his WGC Match Play match against Sergio Garcia.

Ryan Moore hit the front on the opening day of the Memorial Tournament with a superb 7-under 65, one stroke better than a seemingly resurgent Jordan Spieth.

Tiger Woods shot a solid round of 70, but it was a poor day for both Rory McIlroy and Justin Rose with a pair of 75s.