Tiger Woods and Phil Mickelson play Fred Couples and Thomas Pieters in Masters practice round - RIP to the competition. 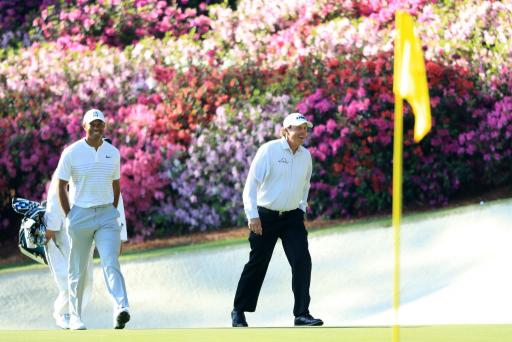 For the first time, Tiger Woods and Phil Mickelson shared a practice round at Augusta ahead of the Masters.

The fact this is a first should not come as a surprise. Their history is not an amicable tale, with both players taking shots at each other over the years as they tussled on the course and off it.

But this is a new Tiger. A relaxed Tiger, a Tiger who has time for journalists and even makes jokes with them, a Tiger who maybe doesn’t see his rivals as threats to be crushed.

Mickelson and Woods - a budding friendship?

“We had so much fun,” Mickelson said of the outing with Tiger when speaking to ESPN.

“He’s a fun guy to be around, we had a great time today. We partnered up and took on Fred Couples and Thomas Pieters - they birdied the first two holes so were two up, and then Tiger and I played 13 through 17, those five holes in seven under so it was over.”

When Mickelson was asked how their relationship has changed, he highlighted to 2016 Ryder Cup as a turning point.

“I think the biggest point for us was when we came together, working together, as one unit with other players...to achieve a common goal at the Ryder Cup at Hazeltine and the preparation for that event,” he added.

“We were talking almost daily there for quite a while, and I think whenever you work together to achieve a common goal it brings a certain unity and emotional connectedness that we have felt, and it just brings you closer.”

And the friendship is clearly strong enough for some casual jibing. With Mickelson turning up to play in a button-down shirt, the chance to poke Lefty was too much for Tiger.

“I was giving him a little grief about it. Only thing missing was a tie,” said Woods.

“We have gone through it a long time, the better part of 20 years, and our friendship has certainly gotten a lot better. And I think it's just age as well. We're at the tail end of our careers, we both know that.”

Mickelson - incredibly - did take a question on the Masters ahead of the...Masters, and he believes the key is to start fast.

“I’m breaking it down into the first two days,” he said. “There are so many great players playing well you cannot leave yourself too far behind. I don’t see somebody coming out of the pack on the weekend, so it’s important to get up on the board those first few days. You’ve got to come out firing and play great golf, and you can’t make too many mistakes this week... Thursday and Friday are just as important as Saturday and Sunday.”