Phil Mickelson has the opportunity to lead strokes-gained putting stat for the first time in his career. 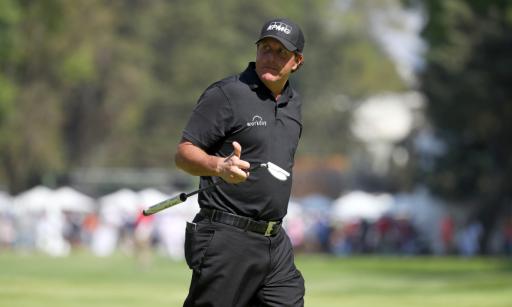 Phil Mickelson is on the verge of leading the PGA Tour's strokes-gained putting statistic for the first time since the stat became available in 2004.

Mickelson was this week given a wildcard pick by Jim Furyk, meaning he will now make a record 12th appearance at the Ryder Cup at Le Golf National later this month.

Lefty may have turned pro in 1993 but strokes-gained putting wasn't around back then - however, Mickelson has the chance to do something he's never done before in the 15 seasons it has been going, and lead the Tour when it comes to being crowned best putter of the year.

Mickelson is currently second in the category, gaining .841 strokes per round, narrowly behind Jason Day who leads at .862.

Mickelson's previous best in this relatively new metric was fifth (.661) in 2013.

Since the stat's inception, Mickelson's putting has improved dramatically. From 2004 to 2011, he never finished better than 40th in the category, including a worst showing on the greens in 2011 when he ranked 144th at -.190. However, since then, he's only been out of the top 40 once, and barring something crazy over the final two weeks, this will be his third time ranking in the top 10 in SGP since 2013.

“There’s a number of areas in my game that, if I look back 10, 15 years ago, I feel like I’m significantly better,” said Mickelson. “Certainly, I’ve gotten a ton better at putting.”

If Mickelson had not done THIS earlier in the season, he would be storming the stat!

PGA Tour
How long would it take YOU to complete this epic Hideki Matsuyama putting drill?
PGA Tour
Could THIS KEY PART of Cameron Smith's game make him a major champion?
Golf news
Golf rules: Am I able to move a MASSIVE nearest to the pin marker like this?
Putting
Golf tips: Struggle with raising your putter too high after impact? Try this...
Putting
Golf tips: Five of the best PGA Tour approved PUTTING drills to get much better