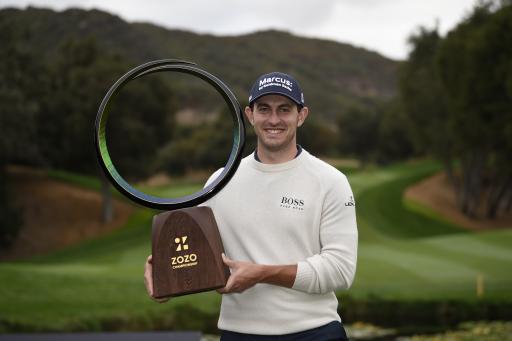 Patrick Cantlay claimed his third PGA Tour title on Sunday after he edged Jon Rahm and Justin Thomas to the ZOZO Championship at Sherwood Country Club.

Sunday's final round looked set to be a showdown between Rahm and overnight leader Thomas, but Cantlay overcame the odds and shot a 7-under par round of 65 to finish the tournament 23-under par and claim a one-shot victory.

Rahm had the chance to take the tournament to a play-off but he missed his birdie putt at 18, while Thomas rolled a four-footer in for a three to finish the tournament T2 with Rahm, which stopped the Spaniard from reclaiming the World No.1 spot.

Cantlay got off to a great start and made his intentions clear from early on, with three birdies in his opening five holes, before he holed a 30-foot putt for another at the par-4 6th.

A bogey at the par-3 8th pegged Cantlay back, but he responded brilliantly with another birdie at the 9th to reach the turn at 4-under par.

Cantlay made four more birdies on the back nine wot help him go three-strokes clear, including a fantastic two at the difficult par-3 15th, but he opened the door for Rahm and Thomas with a poor mistake with a wedge in hand at the par-5 16th.

Catching it slightly fat and hitting it left, Cantlay's ball hit a tree short of the green leaving his ball in the rough, where he failed to get up-and-down from which led to his second bogey of the day.

Thomas left himself in prime position to reach the 16th green in two after a perfect drive, but he then hit his worst shot of the day and sprayed an iron out right and into the penalty area.

The World No.3 played a beautiful shot which led to Thomas salvaging a par, but he knew it was an opportunity wasted.

Rahm got up-and-down from the fairway to make a birdie at 16 and needed one more to book his spot in the play-off with two holes to go, but he couldn't find the gain he needed at either 17 or 18, handing Cantlay his first title since the 2019 Memorial tournament.

NEXT PAGE: Rory McIlroy rocks GOLF HOODIE in final round of ZOZO Championship