This is one of the most interesting swings we have ever seen and he hits it straight... 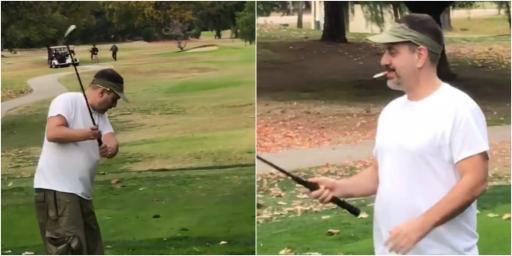 What's that phrase we hear in golf all the time about swinging your swing?

Well, this dude certainly has a unique swing and an interesting sense of style. The New Balance trainers, the cargo shorts, the white tee untucked with a nice green visor. All the while, he's got a crafty fag on the go.

Watch as he nonchalantly drops his cigarette to the floor before before hitting his tee shot on this short par-3. The video popped up on the Instagram page of @davefinksgolfs, who shared he was joined up with this player. He wastes absolutely no time.

Reportedly, his name is Duke and he described him as a "complete and total legend". Apparently he hopped the fence and asked to join up with them on the 10th hole at their public course. "Just an absolutely confusing swing" he wrote but "every shot he hit went dead straight".

Everything about Duke's style and swing was discussed after the video was shared on Zire golf. I can't stop watching this, one person wrote. There is so much to unpack.

One person who took to the comments was Keith Mitchell. Mitchell, 29, has won once on the PGA Tour and was most recently picked out for praise in his game by Rory McIlroy who described him as phenomenal.

This is what Mitchell had to say:

Yeah. Absolutely spot on with that take Keith.

I love this man

Made contact, no pre-swing screwing around, ball traveled a bit. I'm fine with it

He knows his game