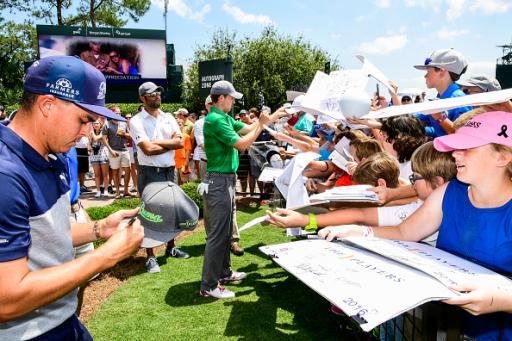 Up for grabs: The Players Championship trophy awaits in front of the magnificent clubhouse.

Calm before the storm: The grandstand awaits at the infamous par-3 "Island Green" 17th.

Defender: Fowler is bidding to become the first golfer to defend the Players Championship.

Fancy footwear: And he will attempt it in new PUMA TitanTour Ignite Tricks shoes.

Back to basics: Spieth is making his first start since throwing away the Masters in April.

Bridge over troubled water: Spieth nips a shot off the path leading up to the 17th green.

All in a day's work: Fowler and Spieth sign autographs for the fans.

Flagship: The Players Championship is considered the PGA Tour's biggest event of the year.

Eyes on the prize: A great blue heron grabs a fish for lunch.

All smiles: A resurgent Phil Mickelson has picked up four top-fives on the PGA Tour this year.

Caught on camera: World number one Jason Day speaks to the media.