Pro golfer wins tournament, then gets DQ'd when drop footage is reviewed

This pro golfer won the Golf Travel People Masters on the 2020 Pro Tour only to be DQ'd from the playoff after footage showed he took an illegal drop. 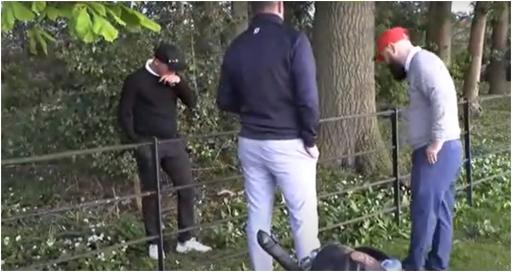 Professional golfer Chris Hanson would have felt on cloud nine after winning the Golf Travel People Masters on the 2020 Pro Tour.

As we all know, winning in golf is hard to come by. Especially more so at the mini tour level.

Hanson was playing the event at Rockcliffe Hall near County Durham and got into a playoff against Dan Brown.

The event was being live streamed. Initially, it did not seem like there was a problem with Hanson's drop at the first playoff hole.

Both players were happy with where he eventually dropped from knee height.

The discussion over what the ruling was took several minutes and it looked like there was a great deal of confusion.

But after later reviewing footage, tournament officials believed the drop was illegal and Hanson was disaqualified from the playoff.

He reportedly dropped in the wrong place.

It meant that the £5,000 top prize was handed over to Brown.

Watch the drop discussion from 55 minutes in the video...

In a statement, Adam Walker, the tournament's co-founder, said: "On reviewing the playoff footage after some live viewing concerns regarding Chris Hanson's drop on the final playoff hole and after speaking with a PGA Official it has come to our attention that the ball was dropped in the wrong place.

"Resulting in Chris being disqualified from the playoff.

"Dan Brown now stands as the Golf Travel People Masters Champion and wins a cheque for £5,000.

"Congratulations to Dan Brown once again and thanks to the Golf Travel People for their continued support."

Both players had finished the tournament at 4-under par.

Still, at least Brown got some cash for the week. He took home £1,555.00 for finishing second.

It was probably all the more sickening given the fact that had he not made bogey at the par-4 18th he would have won the tournament.