Billy Horschel has outlined his thoughts after he and Sam Burns were involved in a lengthy discussion over a drop at the Zurich Classic. 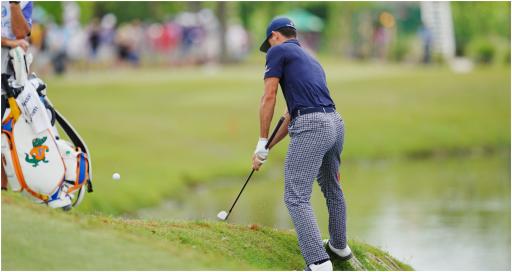 Few things on the PGA Tour captivate an audience as much as a rules drop drama and this time it was Billy Horschel taking centre stage.

Earlier in the year at the Players championship it was Viktor Hovland and Daniel Berger who got into a little spat.

Over the weekend at the team event of the Zurich Classic of New Orleans it was Horschel and his partner Sam Burns involved.

It was a particularly crucial moment in the round as they were in fact two shots behind the leaders Patrick Cantlay and Xander Schauffele.

At the drivable par-4 16th hole at TPC Louisiana, they decided to be aggressive off the tee and go for it.

The rewards of the hole were there for all to see but the risk came in the form of the water guarding the front left of the dance floor.

It was only 299 yards to the pin and therefore Burns had more than enough speed and power to reach. But he tugged it left.

A lengthy discussion ensued between Horschel, Burns and the Australian pairing of Jason Day and Jason Srivener.

Horschel thought and claimed the ball hit the bank before going left into the water, which you can see by the replay.

The issue was whether the golf ball hit outside the red line marking the penalty area. Fine margins, sure.

Billy Horschel and Sam Burns discuss a drop after their tee shot finds the water on No. 16. pic.twitter.com/4kYXbSscdv

But, depending on where the ball landed it would have meant that Burns and Horschel could drop near the green or 30 feet away.

If it landed inside the red line, then they would have had to have taken a drop from the fairway and approximately 50 yards away.

Day was overheard saying: "I didn't see a splash, but I didn't really pay attention". Thanks, Jason.

TV footage did not show where exactly the ball landed and it was determined they had to use their reasonable judgement.

From there, the pair made a par.

Their bid for victory ended at the par-3 17th when Horschel hooked his tee shot and they made bogey.

It was an interesting scenario and some golf fans sided with Horschel and others did not.

This is what Horschel had to say about it after his round: "So from where we were, Sam pulled his drive a little bit and it was coming back.

"[The] conversation was did it land above the red line. Well, I saw a ball land and bounce. From the tee box and everything, you really can't see the red line."

He added: "It's going to take a couple bounces. From what I saw and not being able to see the red line and where the red line was, I couldn't see below that from the tee box when I got up there, so I figured that ball had to land up on top of the red line.

"We asked TV and everything, and TV didn't have clear-cut evidence. Travis, his caddie, saw the ball bounce.

"I'm one to play it safe, but I was pretty confident that ball landed above the red line."