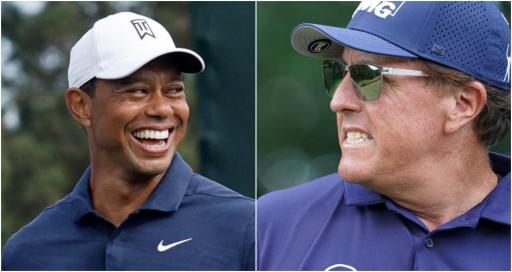 It is widely accepted Phil Mickelson would have won more golf tournaments - or anyone for that matter - if Tiger Woods wasn't around.

Over the years this question has been asked time and time again. How exactly do Tiger and Phil really feel about each other?

Before Tiger returned to major golf at the 86th Masters earlier this month we had barely heard a peep from the big cat as he recovered from the injuries sustained in his car crash.

Then on 2 March 2022 one word was typed out on Tiger's Twitter account. It was "Whoops" - along with two shrug emojis in social media dagger towards Lefty. It was pretty funny, to say the least.

This was because it was revealed that Tiger - not Mickelson -  had won the PGA Tour's inaugral impact program rewarding players who had the biggest worldwide impact on the game with dizzying sums of money.

Tiger won $8million for the top prize whilst Mickelson finished second. Even off the course Tiger managed to get one over on Lefty.

One man who knows Tiger extremely well is his former caddie Steve Williams.

Williams has been discussing Tiger in depth on the Chasing Majors podcast.

There have been some incredible stories revealed so far and in this latest one Williams says there was one man Tiger hated losing at golf to more than Mickelson.

Williams, 58, claims that man was Vijay Singh who got under Tiger's skin.

He said: "You know, Vijay and of course, you know, as strong as the relationship, oh sorry! the rivalry between Tiger and Phil. Tiger and Vijay was even greater probably, I mean, the two guys just hated to lose to each other."

He said of that final round: "Tiger was desperate on Sunday. You know, just somehow get in the mix. And then he [Tiger] goes out in 29 I mean, it's just it's another story that's just mind-boggling."