Jena Sims has bachelorette party ahead of marrying Brooks Koepka

Jena Sims has posted images of her bachelorette party ahead of tying the knot with Brooks Koepka. 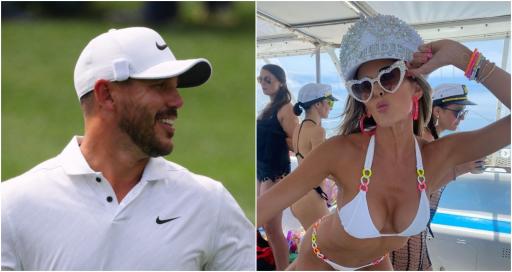 While one of golf's power couples finally tied the knot, another was preparing for their big day. Jena Sims has had her bachelorette party ahead of marrying Brooks Koepka.

Sims took to Instagram on Thursday afternoon where she confirmed that she was jetting off to Aruba with her friends.

She described it as "Jean's last Single Flamingle" before posting a picture with her gal pals on the steps of a private jet.

The couple reportedly first met at the Masters. She said that they met at the seventh hole at Augusta National and later she "slid into his DMs".

Sims supported Koepka at the traditional Masters Par-3 contest. Koepka missed the cut at the first major of the year after shooting 6-over par through 36 holes.

Images from the bachelorette party showed Sims, who is an actress and philanthropist, with the group wearing cowboy hats before they flew to the Carribean paradise.

Her group of friends surprised her by wearing her new trainer she designed with Steve Madden.

When they arrived they went out for a luxurious dinner and also spent time on a yacht enjoying the sunshine.

There were beach towels with her name written on them.

Sims and Koepka have not confirmed a date for their wedding yet but it is expected they are tying the knot this summer.

She told the New York Post: "We're not too hung up on just the extravagance, we want — at the end of the day, we're marrying each other, we already feel like we're married," she said.

"We just want everyone to have a good time, and not stress about some of the big details."