Rafael Nadal: "I've never been a gym guy, I play some golf"

Rafael Nadal has said he enjoys playing golf in his spare time instead of hitting the gym. 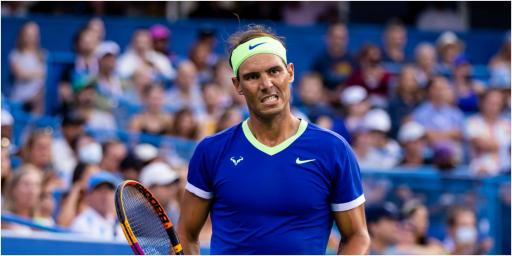 Rafael Nadal can be found on the fairways when he is not playing tennis.

The Spaniard, 35, who is currently ranked number five in the world, has announced before he is a big player of the game.

His swing? Well, it looks very similar to him hitting two-handed winner down the line. He's just swinging his swing.

Nadal, at the time of writing, is currently playing the Australian Open which has been dominated by headlines involving Novak Djokovic.

But he took time to speak to the media about his own game. One reporter asked about his fitness.

Nadal's answer? "I play some golf, I've never been a gym guy".

Well, with the size of those arms you might beg to differ, but it's still cool that other athletes enjoy the game we all love.

Sergio Garcia even took to the comments on Instagram and said: "He plays well too."

Dylan Fritelli, the PGA Tour pro, commented: "The most unconventional swing, but such good hands."

Another asked: "Where's that bicep from then?".

He has won the Australian Open once, the French Open 13 times, Wimbledon twice and the US Open four times.

PGA tour
tennis
rafa nadal
Sergio Garcia
instagram
Previous
Golf rules: Is this a bunker? What constitutes a bunker?
Next
Rory McIlroy: "I've never been so glad to get off the golf course"