Golf rules: What happens if you SCOOP the ball over your shoulder and drain it?

This little lad managed to toss his ball over his shoulder and hole it, but is it legal? 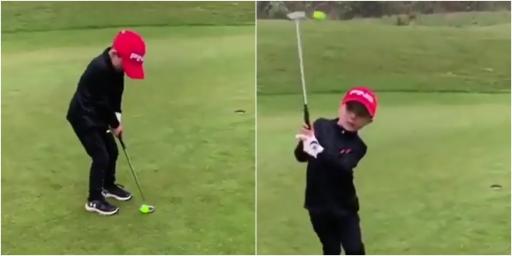 Technically speaking there are a number of ways you can get the ball into the hole in golf.

You can thin it off the tee for a hole-in-one, you can skull it so badly that it ricochets off the flag stick then bounces in. There's also the ever-popular double hit too. There are a number of funky ways the ball - as Happy Gilmore would say - can go back to its home.

But what about scooping the ball? An Instagram clip has gone viral on the golfrules_questions page showing one little lad taking his address position over a putt. But it's a little bit different. He decides to use the back of his putter to scoop the ball over his shoulder and drain it.

MORE: FROM QUALIFYING ON MONDAY TO A MILLIONAIRE

Fair play to the little man, he confidently looks to the camera as if to say he always knew he was going to bury it. He's wearing PING gear so no doubt Bubba Watson - one of the most creative players on the PGA Tour - would have enjoyed his craftsmanship.

But is it legal? Sadly, no this is not allowed. Under rule 12.1 of the Rules of Golf, said player's scoop would count as one stroke then be given a two-shot penalty for the scoop. Yeah, but two strokes come off the penalty for walkin' it in like a freakin' boss, one person pointed out in the comments. Too right.

NEWS: DECHAMBEAU TRIES OUT TOP GOLF, THEN SENDS ONE

NEXT PAGE: SHOULD GOLF HOODIES BE ALLOWED?

Golf news
Golf coach hits shots through wife's MINIVAN to simulate pressure
Golf news
Amateur golfer demonstrates PERFECTLY what 2021 felt like as a golf swing
Equipment news
Is this the coolest pitch mark repairer you have ever seen?
Golf news
Golfer FALLS INTO THE NET at Topgolf with a beer in his hand and gets kicked out
Golf news
Golf rules: Player executes an ICY shot perfectly but did he incur a penalty?