Rules of Golf: How many shots does this player take with bizarre chip technique?

If you attempt to chip with this strange technique, how many shots do you incur under the rules of golf and which penalties apply? 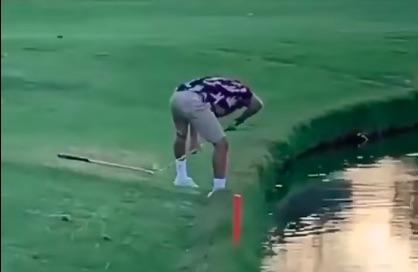 The rules of golf are very complex and although it is very hard to know every guideline, we like to inform our readers of as many rules and scenarios as possible.

In the footage below, a player is standing on the edge of a water hazard and as he appears to be right-handed, he is left with a very difficult task in playing the shot.

A left-handed player such as Phil Mickelson or Bubba Watson would be able to chip their ball on to the green with ease, but this player didn't have that luxury.

Therefore, the player adopts a very unique style of chipping. He stands above his ball and he tries to chip it back between his legs and towards the pin.

However, this is where the rules of golf come into play. As he is standing on the direct line of his shot path, he incurs the general penalty of two strokes.

So with his first attempt at the chip, he must add two shots to the initial attempt. As he tries the shot twice, he incurs three shots twice and takes a total of six shots in the sequence.

Rule 10.1c of the USGA states: "The player must not make a stroke from a stance with a foot deliberately placed on each side of, or with either foot deliberately touching, the line of play or an extension of that line behind the ball."

"For this Rule only, the line of play does not include a reasonable distance on either side."

As a whole, Rule 10.1 concerns the act of making a stroke and the acts that are prohibited in relation to the stroke.

rules of golf
USGA
rule 10.1
<
Previous
"Like you never left" Nelly Korda on the mend after blood clot surgery
>
Next
Is Rory McIlroy's major swagger back? These crazy stats suggest so...
Latest News
Golf news
Venue owned by Donald Trump sweeps accolades at World Golf Awards
Golf news
No golf for Gareth Bale at World Cup?! Think again, he's gone and done THIS!
Golf news
Paige Spiranac takes aim at Rory McIlroy and Ronaldo over "pile of s***"
Golf news
Tour in alliance with LIV Golf enforce HEFTY FINE for players not raking bunkers
Equipment news
Shot Scope launches limited edition England World Cup design
Latest Reviews
GPS Devices
My New Golf Watch? (The BEST) Garmin Approach S62 GPS Golf Watch Review
Irons
SO CHEAP, but do they perform? RAM FX77 Iron Review
Drivers
THE BEST Driver in 2022? Titleist TSR4 Driver Review
GPS Devices
The launch monitor used by Tiger Woods | Full Swing KIT Launch Monitor Review
Putters
Are the NEW 2023 PING Putters right for you? PING DS72 C Putter review
Equipment Reviews
Equipment
FootJoy's Blues Collection is perfect for your game this summer!
Equipment
Peter Millar have an AMAZING selection of golf shorts!
Equipment
The BEST PUMA golf polo shirts as seen on the PGA Tour!
Equipment
The BEST Nike Golf shirts as seen at the PGA Championship
Equipment
NEW VICE Pro Drip Silver Hills Golf Balls: Limited Edition
Latest Tips and Instruction
Tips and Instruction
How to improve your alignment with DP World Tour player Greig Hutcheon
Tips and Instruction
DP World Tour pro Hurly Long and his meditation technique...
Tips and Instruction
Learn how to chip like a winner on the DP World Tour!
Best tips and instruction
What can we learn from Jordan Spieth's new pre-shot routine on the PGA Tour?
Tips and Instruction
How to NEVER MISS another short putt with Manolo Vega!
Related Articles
Golf news
Golf rules: Are you allowed to line yourself up with your golf club?
Golf news
Rules of golf: Did you know this rule about clubs being damaged in your bag?
Golf news
Did you know this rule about teeing up your ball ahead of the tee markers?
Golf news
Do you have to place your marker behind the golf ball on the green?
PGA Tour
Brooks Koepka benefits from new SPRINKLER HEAD RULE on PGA Tour