Rory McIlroy set the early pace at the PGA Championship on Thursday, but will he follow up his good start in the second round? 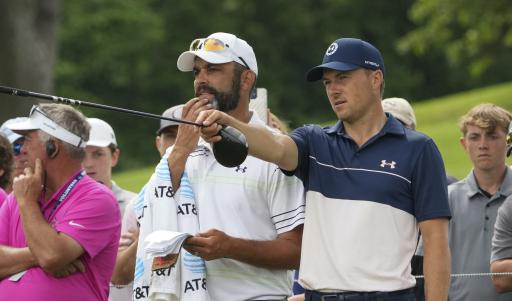 Rory McIlroy began his campaign at the PGA Championship in perfect fashion in the first round, carding 5-under-par to lead the way by a stroke.

It was the Northern Irishman's lowest opening-round score in a major championship since his 65 in the first round of the 2011 US Open which he went on to win.

He led by one shot from Will Zalatoris and Tom Hoge and two shots from former PGA champion Justin Thomas, Matt Kuchar and Abraham Ancer.

McIlroy is aiming to win the US PGA for the third time in his career and his first major title in eight years. It seems his 64 in the final round of The Masters has been a great source of confidence for the 33-year-old.

"It was a great start to the tournament. I've been playing well coming in here. I've been carrying some good form. Obviously, that took a lot from that last round at Augusta, played well up in D.C. at the Wells Fargo there, and played good in the practice rounds earlier this week," said McIlroy.

"I think when your game is feeling like that, it's just a matter of going out there and really sticking to your game plan, executing as well as you possibly can, and just sort of staying in your own little world. I did that really well today. It was nice to get off to that good start and sorta keep it going.

"I feel like this course, it lets you be pretty aggressive off the tee if you want to be, so I hit quite a lot of drivers out there and took advantage of my length and finished that off with some nice iron play and some nice putting."

Take a look below at our best bets for round two of the PGA Championship.

Jordan Spieth shot a disappointing score of 2-over-par in the first round of the US PGA. Despite making over 70% of greens in regulation and over 70% of fairways on Thursday, Spieth made four bogeys. He is only seven shots behind and he entered the week in great form. 50/1 could be a huge price.

Abraham Ancer played solidly on Thursday at Southern Hills, shooting 3-under-par to sit two shots behind McIlroy. The Mexican is ranked fourth in driving accuracy percentage in 2022 and he has made two top-10s as well. As he is only two shots behind the Northern Irishman, 18/1 seems a good price for a very accomplished player to go low on Friday.

Davis Riley continued his fine form in 2022 with a solid 2-under-par 68 on Thursday in Tulsa. This is only his third major appearance and he arrived off the back of five top-10s and a runner-up finish at the Valspar Championship. After his solid first round, he is a very nice price to outscore Sam Burns and Cameron Young on day two.

Viktor Hovland was priced around 28/1 prior to the start of the US PGA and after day one, he is level-par and in a solid position. The young Norwegian made 16 pars at Southern Hills on Thursday and he entered the event with four top-10s and wins in both Mexico and Dubai. This is still a great price for one of the best players in the world.