Spieth counts ACE in golf event, but others say it's a DOUBLE!

Drinks on Jordan Spieth during golf lockdown tournament: "In a six-feet-apart way, drinks are on me." 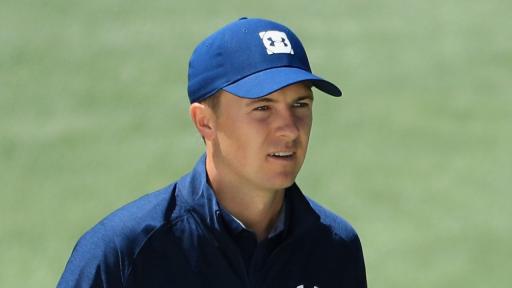 Jordan Spieth believes he made a hole-in-one during a lockdown tourmament in Texas earlier this week, but his playing partners are claiming it was in fact a double bogey!

Confused? Well, that's all thanks to a plastic social-distancing spacer - a new golf term for the piece of plastic resting inside the cup which doesn't let the golf ball into the hole.

Jordan Spieth putting spacer back in place after hitting it on the fly with his tee ball. “May as well count it, why not?” pic.twitter.com/blL1oeqIkv

Spieth, who was playing as a marker at the Maridoe Samaritan Fund Invitational for caddies on his home course, sent a sand wedge into the short 110-yard par-3 17th straight down on the hole.

According to Golf Channel who reported the incident, the only problem for Spieth was that his ball ricocheted off the spacer in the cup and sent his ball into the water.

Dallas Cowboys quarterback Tomy Romo, who was in Spieth's group, told how the score went down as a double-bogey for the purposes of their match, but that Spieth was seeing it a completely different way.

"I’m going to count it," said Spieth. "It was one of those ones where it would most likely have stayed in. I’ve been shut out for a while, so hopefully this is a good omen."

Those in the bar probably didn't mind, either way. "In a six-feet-apart way, drinks are on me," said Spieth.

He added: "I was pumped to be out here today. I really hope we're able to do something like this maybe next month, too, as we start to gear up for the season."

PGA Tour rookie Scottie Scheffler won the tournament by one stroke over Will Zalatoris, and Vikor Hovland finished a further stroke back in third.

Former World No.1 Spieth will certainly be looking for plenty more aces when he returns to the PGA Tour this summer after enduring a wretched run of form the past two years as he currently looks on from 56th in the Official World Golf Rankings.