"The standard of golf was jaw-dropping": Playing a round with blind golfers

Ashley Weller writes an insightful and fascinating story about meeting members of the England and Wales Blind Golf Association. 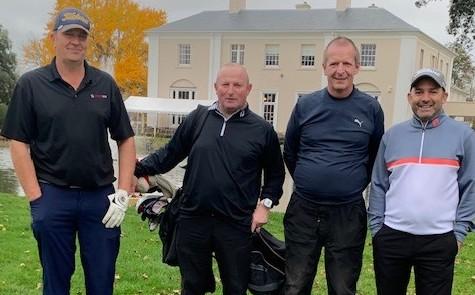 When I agreed to meet Andy Gilford, Secretary of the England and Wales Blind Golf Association for a game at Ham Manor in Sussex I have to admit I didn’t really know what to expect, but I was keen to find out more about blind golf having exchanged several emails with Andy in recent weeks, writes Ashley Weller.

At breakfast, I met Andy’s guide and wife, Mel, another blind golfer, Jason Bastable from Blackmoor GC and his guide and playing partner for the day, Darren Blake, a member at Cranleigh GC.

The guys explained that there are three categories in blind and severely sighted golf, B1, B2 and B3. Loosely speaking B1 is total sight loss going up to B3 which is approximately 10 per cent vision.

Andy is in B2 and has been registered blind since birth and Jason lost his sight around six years ago and is in the B3 category and current ISPS Handa World Champion. The Rules of Golf have been modified to allow a guide to help the player with alignment and they are allowed to stand behind the player while they make their stroke.

The player is also allowed to ground their club in a bunker to help with judging where the ground is. We headed out onto the course and the teamwork between guide and player was fascinating to watch.

The guide describes the hole, yardage and shot required. In Andy’s case, Mel sets the club behind the ball and aims it whereas Darren stands behind Jason with a bit of old fashioned ‘left a bit, right a bit’ until the setup is correct.

Trust between player and guide is essential and it is clear that this is the case with both these pairs, especially on the greens, where the line is read, the distance and slope described in detail and alignment carefully adjusted.

All this is done, it has to be said, far quicker than most sighted golfers take to do it for themselves! The standard of golf was jaw-dropping. Andy generates tremendous clubhead speed and his consistency of strike would be the envy of many handicapped golfers.

Jason has a highly dependable fade and both players have a deft touch around the greens. I had the opportunity of acting as a guide to both on a few shots during the round and it was fascinating to get a chance to interact with them and get an insight into the process of executing a shot.

Describing the situation, lie of the ball, any obstructions and planning the shot required is a necessary skill, but it is a team effort and I was surprised how much input the guys had in this process considering I was the one describing the scene.

I painted the picture but Andy and Jason solved the puzzle and executed the required shot. After a thoroughly entertaining and enjoyable round, we retired to the clubhouse where the delightful Ham Manor staff looked after us royally.

Over our paninis and beer, Andy and Jason talked me through the competitions they play and told some incredibly funny stories about situations and scrapes they have got into whilst travelling the globe playing golf.

The stories were light-hearted but Andy then made the serious point that golf has been literally life-saving for many registered blind people, getting them out in the fresh air, exercising, mixing with club members and competing in tournaments.

And there lies the conundrum - for this to be possible a blind golfer needs a guide who can get them to the golf course and help them round it.

RELATED: BRYSON DECHAMBEAU ARRIVES IN LAS VEGAS AHEAD OF THE MATCH VS BROOKS KOEPKA

Some have family members who will do this, but many do not, and the last thing Andy wants to see is a potential member unable to play due to the lack of a guide.

The Association is launching a social media campaign to highlight their work and attract volunteer guides but at present, there are only 30 active members and this will be able to grow significantly so long as guide numbers increase.

If you are registered blind or are severely sighted and would like to find out more about membership or would like to investigate becoming a guide please contact Andy Gilford on 07885 723343 or enquiries.blindgolf@gmail.com and https://ewblindgolf.co.uk/.

I can tell you from personal experience it is a truly rewarding thing to do.