Tiger Woods vs Collin Morikawa: How do they compare after 60 pro starts?

Collin Morikawa has made an incredible start to his PGA Tour career, but how does it compare to the career of Tiger Woods at the same stage? 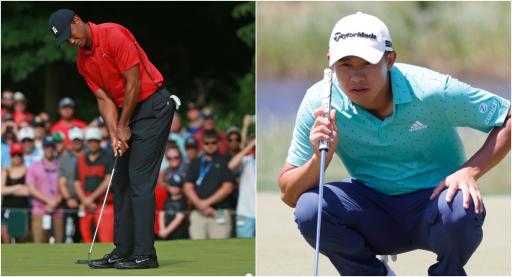 Collin Morikawa may not be World No. 1 just yet, but his career achievements in such a short space of time prove that he is destined for a sustained period at the top of the pile.

He has now played 60 events as a professional and an intriguing comparison was posted on social media by Golf Digest which compared his record after this benchmark to the record of Tiger Woods.

However, Morikawa, who only turned professional two years ago, has won two major titles. He won the PGA Championship in 2020 and this year's Open Championship at Royal St. George's.

In Woods' first 60 events as a professional, he won one major title at The Masters in 1997. This signifies Morikawa's instant rise to stardom.

Morikawa also won a World Golf Championship event this time which was the Workday Championship at The Concession. However, WGC events did not start until 1999 so this puts Woods at a slight disadvantage in this respect.

However, Woods, who recently posted a video on social media of himself hitting balls at a driving range, only missed one cut in his first 60 starts whereas Morikawa missed five.

The 15-time major winner also has a lower scoring average of 68.5 compared to Morikawa's 69.4, but this is extremely marginal.

RELATED: BRYSON DECHAMBEAU ARRIVES IN LAS VEGAS AHEAD OF THE MATCH VS BROOKS KOEPKA

With regards to prize money, you would have to think of the inflation factor over this period. If Morikawa had won six events around the turn of the millennium like Woods, he would've earned a fraction of this figure.

It is a fantastic and necessary comparison and it is one that must flatter Morikawa. What separates Woods from the rest is his longevity and constant success of over two decades. We are yet to see what the future holds for the outstanding Morikawa.