With two days until his showdown with Brooks Koepka, Bryson DeChambeau has landed in Las Vegas and is ready to go. 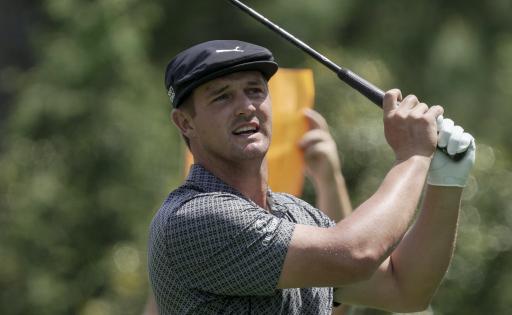 We have two days until their long-awaited duel, but Bryson DeChambeau has already touched down in Las Vegas ahead of The Match.

Yesterday evening in Nevada, DeChambeau arrived by plane and informed his fans that he had arrived and was ready for his fixture with Brooks Koepka.

The former US Open champion has not competitively picked up a golf club since the Ryder Cup and his fine performance at the Professional Long Drivers Association World Championship in October.

DeChambeau looked extremely happy and excited to walk off the plane, as November 26 approaches and the war of words will be put to bed.

Recently, the pair have exchanged comments and sledging jokes towards one another in order to build up attention and interest in what will be a great occasion.

Just four days ago, DeChambeau was filmed hitting bombs at a driving range toward a giant target that had his four-time major winning opponent's face in the middle.

Yesterday, Koepka welcomed the prospect of trash talk in The Match when he spoke on video to Phil Mickelson, who is taking up broadcasting duties this week in Las Vegas alongside NBA legend Charles Barkley.

The 31-year-old, who has missed two out of four cuts so far this season, has said there is nothing he'd love more than to walk away after seven holes, having won the match by that point.

The Wynn Golf Club is the venue and it will be played over 12 holes. It is the fifth edition of The Match and it is the first one that Koepka will be competing in.

DeChambeau has already tasted victory in this fixture when he and the NFL's Aaron Rodgers beat Mickelson and NFL legend Tom Brady back in July.

NEXT PAGE: PHIL MICKELSON AND CHARLES BARKLEY TO COMMENTATE ON THE MATCH