Tiger Woods may have attempted this shot but the only difference is he probably would have pulled it off. This player did not. 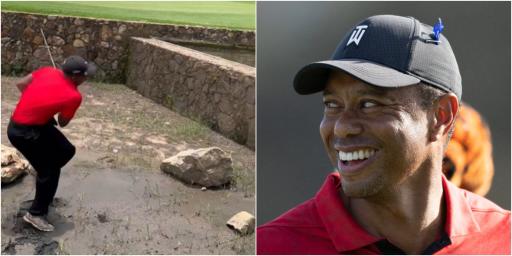 Tiger Woods in his heyday was known for attempting impossible shots and actually pulling them off.

We have seen it time and time again. From awkward lies to being blocked out. From massive hooks to massive fades. We've seen it all.

Woods, who has won 15 major championships and 82 times on the PGA Tour, has dazzled us with so many shots it's hard to pick a favourite.

Such is the hysteria around Woods, 46, us amateur hacks all aspire to play like him. His trademark red is seen every day in golf clubs.

This video surfaced recently of a player dressed in the familair colours of the big cat faced with a tricky shot with the pin not far away.

Taking his stance in the sludge with a wedge in his hands, he slowly winds up the club to the top of his backswing then follows through.

The only problem is being that he has somehow committed the cardinal sin of catching it a little bit thin.

And the rest? As they say, it's history. The ball cannons off the wall and straight back to him quicker than he can scream: "Get in the hole!"

It no doubt prevented his playing partners' domes from being taken off. So there's always one positive. Just look at that.

Well, the only thing we can say is that we hope the player is okay after taking one straight below the waistline.

Related: How one pro was let down watching Tiger Woods

Watch the video below (what a great choice of commentary)