Rory McIlroy: I love every version of Tiger, but I like this one

Rory McIlroy has spoken about "mythical man in a red shirt" Tiger Woods and what makes him so authentic. 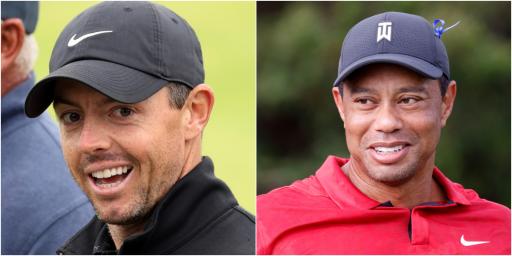 Rory McIlroy has opened up on his relationship with Tiger Woods, explaining he views him as "a mythical man in a red shirt".

The Northern Irishman was speaking to Golf as part of an extensive Q&A where he lifted the lid on a number of topics.

He was asked about his career, his relationship with Pete Cowen, long-time coach Michael Bannon and the evils of social media.

Oh, and he was also asked about his working relationship with his caddie Harry Diamond, who has been on the bag since 2017.

All that is missing is a major win. But for McIlroy, he appears to be focused on living in the present and being a father to Poppy.

One topic that came up was of course Woods, with McIlroy, 32, telling the publication that he's liked "every version of Tiger".

McIlroy also spoke about major weeks and how, try as he might, they do not feel normal. McIlroy appeared to ask Woods for advice.

He was prompted about how in the past he found it interesting that Woods, 46, had no idea where his non-major trophies are kept.

"What I didn't get to say at the time is that it was so authentic. All Tiger has talked about his whole career is just winning majors, right? That's all that matters. Then you go to his house and you see the trophies for [just] the majors, and he said to me, 'Yeah, I don't really know where the rest of them are.' He's not bulls—ing. That was authentic. That is literally [the truth of it]. I thought that was cool."

Asked about what he makes of this phase in his career, McIlroy told Golf:

"It was always going to come. At some point he wasn't going to play as much. It's probably come a little sooner than we all hoped. And I've seen him mellow a bunch as the years have gone on, even from my first interactions with him in '09. So I think he's a more balanced and well-rounded individual because of it all. And I think that's a good thing; I think it puts all of his achievements in perspective a little bit.

"I love every version of Tiger, but I like this version because he's - I always call him this mythical man in a red shirt but he seems more human to me, more relatable, and I think that's a good thing.

McIlroy was also asked if he gets the chance to talk to Woods much. He answered:

"A little bit, yeah. From time to time. We text. I've been to see him. JT got really close to him. But it's this thing where I grew up watching this guy as my hero and I sort of think, like - you don't want to be friends with me. It's the same thing when I play golf with Michael Jordan, which I do probably once a week at home, and I'm always thinking about these are people I never imagined I'd be hanging out with. And so it's hard to put them in a category. Are they friends? Who are they? I struggle with that."

Mcilroy is not playing this week. He decided not to play the Saudi International. He will next peg it up at the Genesis Invitational on 17 February.