After the first round of The Northern Trust, four players are tied for the lead, whilst Tommy Fleetwood is just two strokes behind. 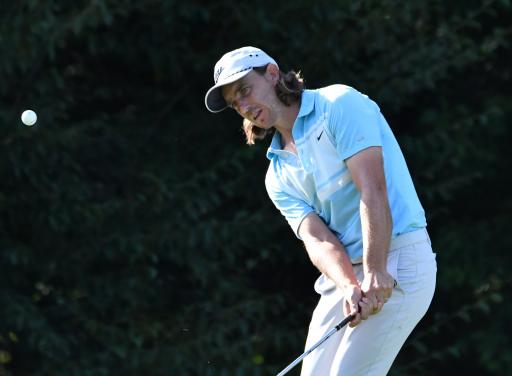 The first FedExCup play-off tournament proved to be another low-scoring opening round on the PGA Tour, with four players tied for the lead at TPC Bpston for The Northern Trust.

A late storm from Russell Henley saw the American join Harris English, Kevin Streelman and Cameron Davis for a share of the lead.

Henley made birdies at the 15th and 17th before leaving himself with a tap-in for eagle at the par-5 last to become the fourth player to shoot a 7-under par score of 64.

@RussHenleyGolf saved his best for last.

An eagle on the 18th gives him a share of the lead after Round 1.#QuickHits pic.twitter.com/9WqvBkzjMa

Tommy Fleetwood will be kicking himself after late mistakes saw the Englishman go from tied first to two strokes back at T12. The World No.13 bogeyed the 17th before putting one out of bounds down the last to finish with a double-bogey.

Seven players are in the chasing pack at T5 just one shot off the pace, including ,ajor winners Louis Oosthuizen and Bubba Watson, as well as one of golf's next top stars in Matthew Wolff.

Ian Poulter, who will need a strong week if he is to break into the top 70 of the FedExCup standings and make it to the BMW Championship, opened his tournament with a classy 5-under par round, seeing him join the 8-man tie for 12th place alongside his compatriot Fleetwood.

Fellow Englishman Tyrrell Hatton, tipped by GolfMagic's Jack Seddon this week at 66/1, fired a 4-under par score of 67, to finish the opening round in T20 with the likes of Rickie Fowler and Dustin Johnson.

Defending champion Patrick Reed, also tipped by the GolfMagic team, birdied three of his last four holes to finish 3-under par, a score mathced by Tiger Woods and Justin Thomas, whilst Rory McIlroy and Jordan Spieth both finished one shot further back at 2-under par.

NEXT PAGE: Golfer gets HOLE-IN-ONE using a PUTTER on102-yard par-3!