Brett White was in contention at the Colbert Charity Classic, but he was disqualified for a rule break that we have never seen before. 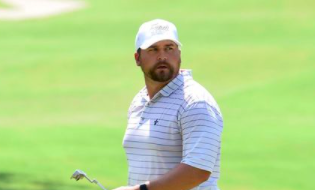 All Pro Tour player Brett White was disqualified from the Colbert Charity Classic last weekend for having his rangefinder in "slope mode."

On the third tee box of his fourth round, White's playing partners noticed that his rangefinding device was in "slope mode", which violates rule 4.3 in the USGA rules of golf guide.

Rule 4.3 states that devices are allowed to be used to measure distance and direction, but they are not allowed to be used for measuring elevation changes or interpreting distance or directional information, such as to get a recommended line of play or club selection based on the location of the player's ball.

On the 3rd tee box during round 4 my playing partners noticed my rangefinder clicked on slope mode. I did not notice it was on until after my fourth shot. While it was a complete accident, intent in this situation does not matter and I was DQ’d. Tough pill to swallow.

Although it was not White's intention to have this mode switched on, he admitted that this did not matter and he accepted his disqualification.

White was playing in the final three-ball alongside Hayden Wood and Zack Bachou and he was only four shots behind heading into the final round of the All Pro Tour tournament.

This seems like a very harsh and peculiar rules infringement that he has been disqualified for, but the USGA have intended to restrict the use of distance measuring devices so that they do not eradicate skill out of the sport.

Wood went on to win at Colbert Hills Golf Course in Kansas by one shot on 18-under-par, while White was left to rue what could have been.