Was this the same alligator from Happy Gilmore? 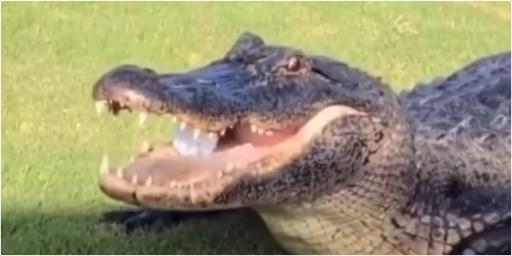 Only in Australia. How many times have we heard this?

At GolfMagic, we have seen a number of things over the years. Nothing surprises us anymore.

In Australia, it is usually kangaroos that are wreaking havoc and jumping across the greens whilst players are trying to putt.

But on this occasion it was an alligator who stole a player's golf ball. Play it as it lies, anyone?!

Fans commented on the post suggesting it was the same alligator from Happy Gilmore that bit off Chubbs Peterson's hand.

Chubbs played Adam Sandler's golf coach and mentor and in the film was forced to retire early after his hand was bitten off.

Well, in Australia, there are no alligators, only crocidles. So this video is not from down under.

But wherever this video is filmed, you wouldn't find me on the course.

Last year, we saw a woman mobbed on the tee by kangaroos. Though this looks a bit scarier.

"Chubbs, you took his hand!"

"Behind the scenes in Happy Gilmore!"

"Anyone come here to see the play it as it lies comments?"