Jon Rahm: "I'm out here complaining a little bit but I'm still up there"

Jon Rahm looked frustrated with his putting at the WM Phoenix Open but he is not getting distracted from the bigger picture. 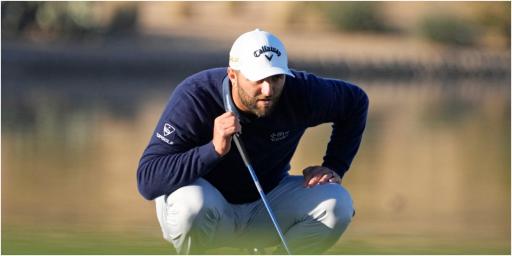 Jon Rahm insists he is looking at the "bigger picture" after a frustrating time on the greens led to disappointment in Phoenix.

The world number one entered the WM Phoenix Open as the firm favourite but in the end finished four strokes behind the winner.

The Spaniard, at times, cut a frustrated figure. It seemed like he couldn't buy a putt. In the third round, he actually lost strokes on the field with his putter.

Despite what was considered an "off-week" for the 27-year-old, he finished in a tie for tenth alongside Patton Kizzire, Matthew Fitzpatrick and Keith Mitchell.

That saw him finish inside the top-10 for the 10th time in his last 12 PGA Tour starts.

Moreover, he extended his streak at the top of the OWGR to 31 weeks.

It is the longest streak at the top of the mountain since Dustin Johnson in 2020, when the American was number one for 38 weeks in total.

Still, he has some way to catch Tiger Woods' record. The cat spent a total of 281 consecutive weeks as the world number one.

Rahm isn't letting one week get in the way of the big picture. He has already set lofty goals for 2022 and is the favourite to win the Masters.

He told the media when asked if he felt dissapointed: "No, it's just one more week. Like some of the last few were -- I'm not even hitting it or playing even close to as good as I know I can play or even as comfortable.

"I'm battling a little bit of just not being comfortable in the swing, even though I've had two second places this year, and I think was it Palm Springs was a 14th place?

"So it's not like I'm too far away. I'm out here kind of complaining a little bit how I'm feeling and I'm still up there.

"That means all the hard work I've put in has been working, and at some point things are going to start happening. It's still early in the year, I did take three months off, not that I was expecting this to happen, but it's understandable."

Rahm's next tournament is the Genesis Invitational at Riviera Country Club. Woods is the tournament host.