A group of baseball players watched on as one of their teammates attempted to hit a ball with a baseball bat, but things took a turn for the worse. 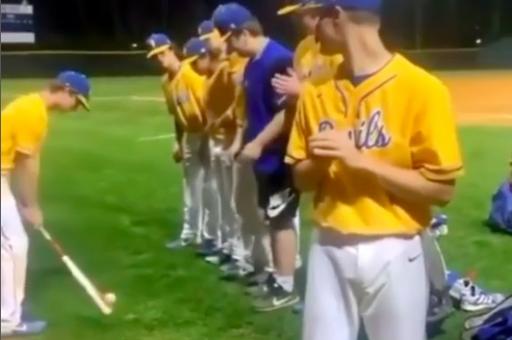 Some people think that racket and club sports can easily mix together, but this is not the case for baseball and golf.

You could argue that the swing motions share some similarities, however, the baseball and the golf ball are very different objects and you need to be careful when mixing the two.

It would be very hard to put a baseball on the floor and use your bat to hit the ball, let alone using a bat to hit a golf ball off the deck.

As we can see in the video below, one of the baseball players attempts the former and it leads to catastrophic, but admittedly funny, circumstances.

It appears a player is about to be interviewed but the chat is interrupted by one of his teammates preparing to hit a baseball with his bat down the pitch.

The rest of the squad are lined up next to the ball and it is at this point that one unlucky squad member suffers a painful and stinging fate.

As the player swings back, he hits the ball straight right, resembling some sort of toe shank, and the ball cannons into the ankles of one of the players.

All of the players immediately laugh their heads off and show no sympathy for their injured teammate. To be honest, would anyone react any differently?

Take a look below at the best fan reactions:

"One man’s pain is everyone’s laughter," one fan said.

"And that’s how their star player was benched for the entire season," one fan reacted.

"You mean the toe," another fan said.

"Loved this video even before I started playing golf," another fan commented.