WATCH: Could you do keepy uppys while getting changed?

Performing keepy uppys with a golf club is hard enough anyway, but could you do it while trying to put on a hoodie at the same time? 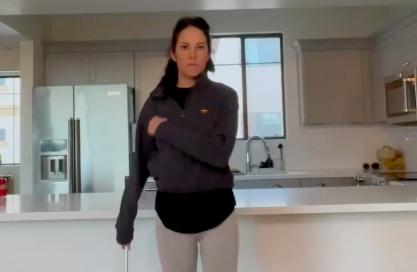 Keepy uppys are usually associated with football, but you can also do them with your wedge and a golf ball. Well, it is easier said than done.

When you are being held up during your round or perhaps when you are bored on the practice ground, you might start doing keepy uppys to pass the time.

Some people can do them very easily but some people struggle. I am certainly one who struggles with this skill and it is very frustrating.

You may have seen your favourite players from the PGA Tour and the DP World Tour do them in various videos from down the years. These players make it look like second nature.

RELATED: COULD TOM BRADY BECOME A GREAT GOLFER IN HIS RETIREMENT FROM NFL?

However, as you can see in the footage below, I had never before seen a golfer perform this trick while putting on a hoodie, and I doubt anyone else had too.

The woman in the video is clearly an extremely talented golfer with immense control over the wedge and the position of the clubface.

She remains completely focused on keeping the ball in the air while she tries to put on her hoodie. She begins by putting the garment over her head.

While keeping the ball up with her right hand, she puts the hoodie on with her left arm. She then swaps her arms and slips on the hoodie over her whole body.

It is fair to say that this would take a lot of players several attempts, but it seems like this woman has done it with consummate ease and in no time at all.

Are you inspired by this fantastic effort? Why not try it yourself? It would be a great achievement that not many golfers would be capable of.

NEXT PAGE: TAYLORMADE STEALTH VS COBRA LTDX | WHICH IRONS WILL IMPROVE YOUR GAME?