WATCH: Did this golfer mean to pull off this AMAZING TRICK SHOT?

This golfer pulled off a shot that we very rarely see, but did he mean to do it? 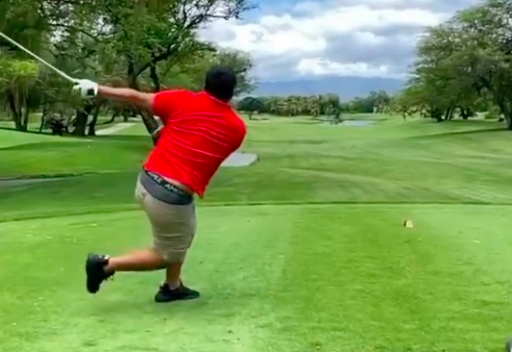 We have seen many trick shots over the years that are a product of endless hours of practice and hard work. When the golfer executes the trick shot it is always an incredible moment.

Whether it is a flop shot or chipping the ball into a cup, the trick shot usually comes from pure skill and there is no luck involved. In the video below, we have a trick shot that is very much up for debate.

The player is on the golf course with his driver in his hand and it looks as though he intends on striping his ball down the middle of the fairway.

However, it appears that the man accidentally tops his ball. It goes straight up into the air and it goes so high that the ball actually disappears from the top of the screen.

RELATED: COULD A SOLID QBE SHOOTOUT SHOWING BRING BACK THE OLD JASON DAY?

When it comes back down, the golfer swings his club back once again and swings for the ball again. He produces a much sweeter connection this time and strikes the ball away.

The question is: was this part of the plan? Did he deliberately top his ball into the air so that he could volley it or was he just so annoyed with his topped drive that he hit it again out of frustration?

It would be a very hard skill to execute out on the golf course at that moment, however, he does react very quickly before the ball comes back down.

Whatever the answer is, the man was very pleased with his shot and to be fair, it was a very good strike when he hit the ball the second time around.

Here is what golf fans had to say about the trick shot. Did he mean to execute it?

"4 shots... He hit it twice & a 2 stroke penalty for hitting a moving ball," one fan commented.

"Like he’s going to be counting accurately anyway," another fan said.

"We ain’t on tour, absolutely," another fan commented.