John Daly was filmed taking a phone call from Donald Trump about his relationship with Vladimir Putin. 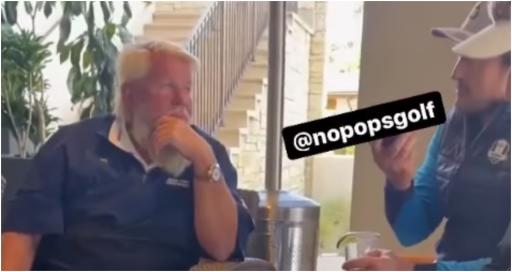 It is no secret John Daly and Donald Trump are friends. They have been pictured on the golf course together a number of times.

Perhaps one of the most extraordinary claims from Daly about Trump is that he doesn't believe the former president cheats at the game.

He might take a mulligan here or there, Daly once claimed, but he never caught him in the act.

This is to the contrary to some of the claims that have previously dogged Trump when he pegs it up at one of his many golf courses.

There have been accusations of balls being kicked out of the rough and even others "found" when they were gone.

Daly believes that Trump is at the skill level of an eight or nine handicap but his short game needs some work.

A video on social media has gone viral showing Daly taking a call from Trump, bragging about his relationship with Vladimir Putin.

Trump claims in the phone call: "Yeah, they're all saying oh he's in nuclear power, it's like they are afraid of him. You know, he was a friend of mine.

"I got along great with him. I say Vladimir, if you do it we're hitting Moscow. I said we're going to his Moscow. And he sort of believed me in like five per cent, 10 per cent.

"That's all you need. He never did it during my time, John, you know. We're all talking about it. No it's funny, during the last four years because he knew he couldn't."

Trump warns that Taiwan will be the next country invaded.