Jon Rahm on his putter: "I love when people make up stories"

Jon Rahm gave a forthright answer when he was asked about this one piece of equipment after his first round at Bay Hill. 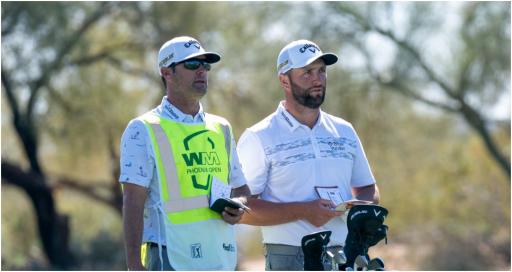 Jon Rahm admitted his hands were sweaty as he tried to stop that putt he missed from 11 inches.

The World No.1 knew he could not escape his press conference after round one at Bay Hill without giving his thoughts on that stab.

"I really couldn't tell you. I wish I could give you all the excuses in the world," Rahm told the media of his shocking, underhit miss.

"I just simply didn't stop. I don't know. It was very odd." Odd indeed. The moment was indicative of his problems on the greens of late.

Rahm has looked in good knick elsewhere in the game. The driving has been on point. His approach shots into the green? Awesome.

Though it seems he just can't buy a putt. So much so, it has led to speculation about his equipment.

The 27-year-old Spaniard is using a new Odyssey putter this week. But didn't go to plan on day one. He was 113th in the field in SG: Putting.

Rahm was asked if he had changed the length of his putter this week. Well, Rahm made his feelings pretty clear.

"I love when people make up stories. I'm going to clarify this right now because I heard it throughout my whole pro career.

"Since my senior year in college 2016, the length of my putter hasn't changed. I'm not going to say who.

"One particular guy just starts making up the length of my putters. Just over 37 inches, and it's been like that since my final semester in college, 2016."

Rahm eventually signed for an even-par 70 at Arnie's place. He told reporters that despite that short miss it didn't affect the rest of the round and he felt like he was striking it good.

He was aiming for a round in the 60s on day two. "It just sucks to give that one away," he said.

We are all Jon Rahm.