Kevin Na was confused with the news Tiger Woods won the PGA Tour's player impact program ahead of Phil Mickelson. 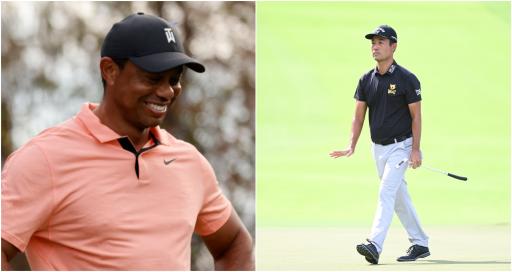 With one word and two emojis, Tiger Woods probably all but wrapped up next year's player impact program minutes after being announced as the inaugral winner.

"Whoops", was the post coming out of Woods' official Twitter account. Whether or not that was actually sent by the cat remains to be seen, but it was still a pretty hilarious response.

So despite not playing a single competitive round, Woods is now $8million richer after winning the PGA Tour's cash giveaway program for players bringing the most attention to the sport.

Despite what some may believe, the program wasn't just a social media contest. This is in spite of the impact Woods' comeback swing generated. He hadn't played competitive golf in 2021 and yet that swing was the most exciting thing we had seen all year.

Jon Rahm draining putts down the stretch Torrey Pines to win his maiden U.S. Open? No. Give us "making progress".

Woods is the needle mover in the sport. As you would expect, Phil Mickelson, Rory McIlroy, Bryson DeChambeau, Justin Thomas, Brooks Koepka, Dustin Johnson, Jon Rahm and Jordan Spieth make up the other "needle movers".

Collin Morikawa was number 11 in the list and missed out on any juicy cash. He changed his Twitter account name to Co11in in an apparent swipe at the PGA Tour.

This is what he posted:

Woke up to still being #11 on PIP. But if you don’t believe me, too bad because anything after 10th doesn’t matter. Happy day #Co11in

Tiger Woods wins the $8Mil PIP! I’m all for paying @TigerWoods because he made us all richer but he didn’t hit 1 shot in 2021. @PGATOUR how is this possible also I thought @PhilMickelson won. Did this result have any affect in the last 2 weeks? haha

How was this calculated?

It was calculated using this criteria:

The PIP fund will increase from $40million to $50million next season, with Tiger Woods the winner getting $10million.